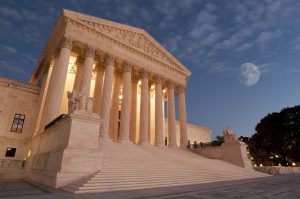 The first case was Little Sisters of the Poor v. Commonwealth of Pennsylvania. In 2016, the Catholic group Little Sisters of the Poor won a Supreme Court decision that exempted them from the mandate in the Affordable Care Act of 2010 (ACA) that required employees to provide insurance coverage for contraceptives, sterilization, and abortifacients. The court ordered the Health and Human Services to create a religious exemption, which was established in 2017. However, the state of Pennsylvania sued the federal government to take away the exemption from the Little Sisters. Pennsylvania asked a judge to order that the Little Sisters must comply with the federal mandate (not a state mandate) or pay tens of millions of dollars in fines.

In a 7-2 ruling released on Wednesday, the Court held that the Departments of Health and Human Services, Labor, and the Treasury had the authority under the ACA to authorize religious and moral exemptions to the mandate.

The second case was Our Lady of Guadalupe School v. Morissey-Berru. In 2015, Morrissey-Berru, a teacher at a Catholic school who was responsible for leading students in daily prayer and preparing them for Mass, was not rehired by the school because of poor performance. As Becket Law explains, the teacher sued in federal district court, which agreed with the Supreme Court’s Hosanna-Tabor decision that church schools like Our Lady of Guadalupe have the right to select their teachers—a concept known as the ministerial exception. On appeal, the Ninth Circuit reversed the decision, admitting that while Morrissey-Berru had many religious duties, they were not religious enough to warrant First Amendment protections.

In a 7-2 ruling also issued on Wednesday, the Court held that the First Amendment’s Religion Clauses prevents certain employees of religious institutions from suing for employment discrimination.

What It Means: Forcing nuns to pay for contraception and abortifacients should not be a priority for government, yet several states—including Pennsylvania and California—have fought for almost a decade to require the Little Sisters of the Poor to violate their sincerely held religious beliefs. This relentless disregard for rights of conscience and the refusal of states to provide a simple accommodation to religious belief makes this a temporary victory.

“The majority opinion allows for religious exemptions and even praises them as a necessary extension of religious liberty,” observes Kaylee McGhee. “But this ruling does not require religious exemptions. And it specifically states that future exemptions are still subject to the rule-making process outlined by the Administrative Procedures Act.”

Because government at all levels often remains hostile to religious belief, we are likely to see many more such cases in the future.

Fortunately, a sturdier victory was achieved in the case involving ministerial exceptions.

The ministerial exception is a legal doctrine which prohibits the application of anti-discrimination laws to religious institutions’ employment relationships with its “ministers.” In their 2012 ruling in Hosanna-Tabor Evangelical Lutheran Church and School, the Supreme Court explicitly agreed that the courts have long recognized “the existence of a ‘ministerial exception,’ grounded in the First Amendment, that precludes application of [Title VII and other employment discrimination laws] to claims concerning the employment relationship between a religious institution and its ministers.” The Our Lady of Guadalupe School case tested whether the ministerial exception could be applied to school teachers and or other roles that may not directly require performing religious duties.

Writing for the majority, Justice Samuel Alito said that it would be a violation of the religious organization’s independence for the courts to consider the teachers’ workplace discrimination claims.

“The religious education and formation of students is the very reason for the existence of most private religious schools, and therefore the selection and supervision of the teachers upon whom the schools rely to do this work lie at the core of their mission,” wrote Alito.

By leaving the decision about who counts as “ministers” to religious groups, the Court has pushed back on unnecessary governmental interference. “Today is a huge win for religious schools of all faith traditions,” said Eric Rassbach, vice president and senior counsel at Becket, who argued the case to the Court. “The last thing government officials should do is decide who is authorized to teach Catholicism to Catholics or Judaism to Jews. We are glad the Court has resoundingly reaffirmed that churches and synagogues, not government, control who teaches kids about God.”

Megan Hill on Why Church Is Good for Kids – Ginger Blomberg, Megan Hill