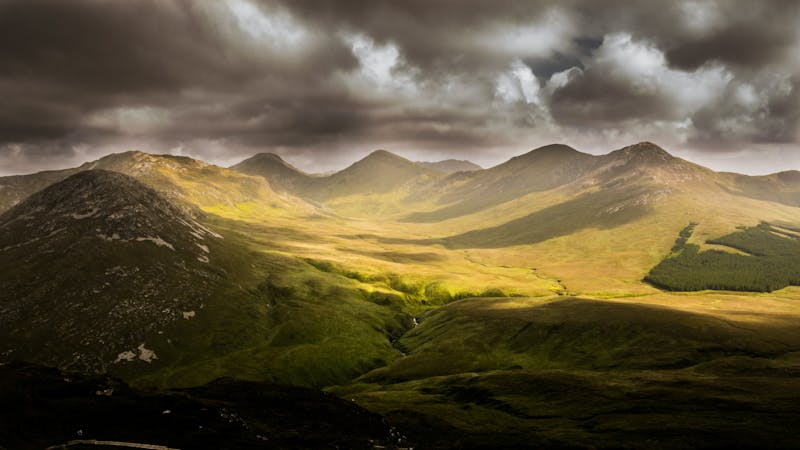 The book of Revelation confuses many Christians. Filled with beasts, angels, living creatures, wars, lightning, thunder, prophecies, and visions, its story can be a bit overwhelming for any of us. Something like a Marvel movie on steroids.

Not surprisingly, scholars differ widely on what it all means. Some try to tie it to actual people and events in history. Others assign most of Revelation to the future. Still others believe God is giving us repeated descriptions of what is taking place now in the church age.

Wherever we land on the bigger picture, Revelation gives us a series of windows into reality that are both hard to miss and easier to understand: its songs. Woven into the fabric of the book are around a dozen choruses, both spoken and sung. That shouldn’t surprise us given how often in Scripture drawing near to God is expressed and encouraged through singing.

But these songs of heaven are unique. They’re written by God himself, and they show us what singing in God’s presence will really be like. And we may be singing some form of these particular choruses forever. Even now, though, they have much to teach us.

Let’s admit it. The descriptions of the singing of heaven put the sound of any rock concert or sports stadium to shame, not to mention most churches.

Myriads of myriads and thousands of thousands, saying with a loud voice . . . (Revelation 5:11–12)

And I heard every creature in heaven and on earth and under the earth and in the sea . . . (Revelation 5:13)

Then I heard what seemed to be the voice of a great multitude, like the roar of many waters and like the sound of mighty peals of thunder . . . (Revelation 19:6)

Both audibly and visually, we’re confronted with the fact that those who truly grasp God’s nature and what he’s accomplished will be moved to sing. As Dennis Johnson writes, Revelation shows us that “those who dwell with God in heaven constantly break forth in song, overwhelmed with joy and adoration by his perfections in himself and by his awesome achievements in creation and redemption” (Triumph of the Lamb, 330).

The example of heaven challenges the assumption that congregational worship should be reserved and subdued. While we cite proof texts, claim to honor tradition, and avoid looking too fanatical, might it be that we’re actually just failing to see how great God’s glory in Christ really is?

Heaven’s songs give us insight into the character of God, the works of his hands, and why he does what he does. We don’t hear any of the simple, repetitious 7-11 songs (7 words repeated 11 times — or more!) that are so popular today. Rather, the lyrics shed real light on what’s happening in the world and in the heavenly throne room.

For instance, at the beginning of Revelation 4, John is shown an open door in heaven. He paints a moving picture of what he sees and hears. A throne. An emerald-like rainbow. Flashes of lightning. Peals of thunder. But what does it all mean? Revelation 4:8 tells us:

Holy, holy, holy, is the Lord God Almighty,
who was and is and is to come!

God is thrice holy — righteous, omnipotent, eternal, set apart. The song of verse 11 further explains that God created all things and sustains all things for his pleasure:

Worthy are you, our Lord and God,
to receive glory and honor and power,
for you created all things,
and by your will they existed and were created. (Revelation 4:11)

At the beginning of chapter 5, John hears a new song, sung to the Lamb:

Worthy are you to take the scroll
and to open its seals,
for you were slain, and by your blood you ransomed people for God
from every tribe and language and people and nation,
and you have made them a kingdom and priests to our God,
and they shall reign on the earth. (Revelation 5:9–10)

The Lamb could open the scroll because he was slain, a reference to his substitutionary death on the cross. His death ransomed people for God from every tribe, language, people, and nation, a reference to the international scope of the gospel invitation.

The ransomed will be a kingdom and priests to God who will reign forever on earth, a statement showing that God’s promise to make Israel “a kingdom of priests and a holy nation” (Exodus 19:6) was fulfilled in the church, made up of both Jews and Gentiles. In short, despite the turmoil and tests of the present age, God will surely have a diverse people for his glory with whom he will live forever.

After an outpouring of praise for the Lamb’s attributes (Revelation 5:12), we hear another song, declaring Jesus’s divinity as clearly as any passage in Scripture: “To him who sits on the throne and to the Lamb be blessing and honor and glory and might forever and ever!” (Revelation 5:13). In a similar way, our songs should be filled with the character, nature, purposes, actions, and heart of God. Words don’t get in the way of worship. They give substance and meaning to it.

When God gave John the prophecy of Revelation, Christians were already facing varying degrees of persecution, and it was expected to increase. Pressures to conform to a pagan culture, and even to participate in the idolatry of emperor worship, came at Christians from every direction.

What would give John’s readers faith to endure and courage to stand against opposition? What would strengthen their resolve as they saw friends and family members taken from their homes and martyred for their allegiance to King Jesus? The knowledge that God’s throne is immovable, sovereign, and eternal.

The saints needed to be reminded that, in the heavenly realms, God’s authority and rule are not only affirmed, but celebrated:

We give thanks to you, Lord God Almighty,
who is and who was,
for you have taken your great power
and begun to reign. (Revelation 11:17)

Hallelujah!
Salvation and glory and power belong to our God,
for his judgments are true and just;
for he has judged the great prostitute
who corrupted the earth with her immorality,
and has avenged on her the blood of his servants. (Revelation 19:1–2)

How often do our songs both detail the forces of evil arrayed against us and point us clearly to the God who has triumphed over them in Christ? David Peterson asks,

Do our hymns and acclamations . . . challenge us to take a firm stand against every manifestation of Satan’s power and to bear faithful witness to the truth of the gospel in our society? It is not good enough to sing certain items merely because they make the congregation feel good! (Engaging with God, 278)

When we sing together, our strength comes not from aiming to feel and emote, but to see and hear. We want to see God reigning on his throne with absolute justice, wisdom, and power over every terrorist, virus, dictator, and manifestation of evil in our day. And we want to hear and join in the cries of jubilation that are already ascending to the God who can do all things and whose purposes cannot be thwarted (Job 42:2).

Endurance is one thing. Expectation is another. It’s possible to sing through dark seasons, discouraging outcomes, heart-wrenching losses, relentless opposition, and dwindling resources with grit, resolve, and stoicism. But that doesn’t describe the songs of heaven. Not even close. They’re marked by joy.

And that joy stems from a confident expectation that God will accomplish everything he has promised. The final songs of Revelation describe God overcoming all evil, the nations bowing down in worship, and the bride of Christ finally beholding her groom, King Jesus, at a never-ending royal celebration of grace.

All nations will come
and worship you,
for your righteous acts have been revealed. (Revelation 15:4)

Hallelujah!
For the Lord our God
the Almighty reigns.
Let us rejoice and exult
and give him the glory,
for the marriage of the Lamb has come,
and his Bride has made herself ready;
it was granted her to clothe herself
with fine linen, bright and pure. (Revelation 19:6–8)

Do our songs help people clearly understand that what’s yet to come is not only certain but worth celebrating now? Do we fill them with anticipation for our glorious future in Christ, when “all the waiting will be over, every sorrow will be healed, all the dreams it seemed could never be will all be real”? Our songs help bring into sharper focus the things hoped for and unseen that God has promised to us.

Is it possible . . . that, as we declared the same truths about God as the heavenly beings do, the same Holy Spirit who is pictured as being before the throne would deepen and transform our understanding of God and his glory in a way that touches our whole being, in its spiritual, intellectual, emotional, and even physical components? (Revelation: A Shorter Commentary, 108)

It’s not only possible. It’s God’s intention. So, may we joyfully model our singing after the songs of heaven until, by the grace of God, they are no longer just a worthy goal, but the sound of present reality.