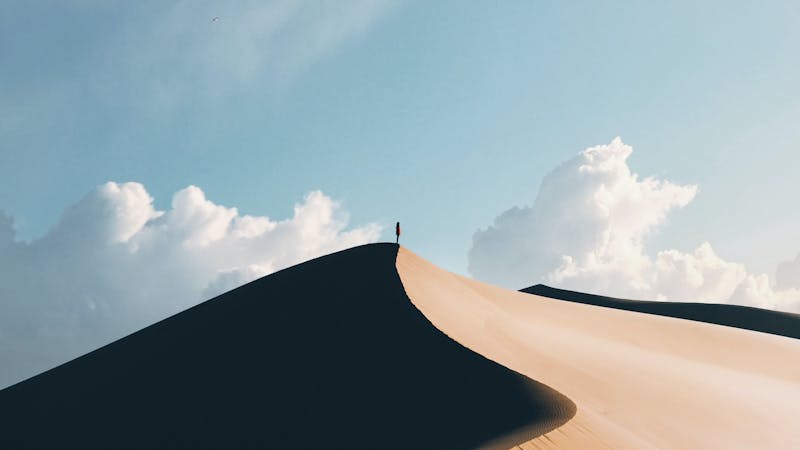 We often think of relationships in terms of distance. They can be close or distant. To be human is to be close to the ones we love. I consider it a problem if I am with my wife for an hour and we never touch. I want to be close, and that closeness includes physical proximity, personal openness, and seeking Christ together.

This simple observation declares much more, of course. The triune God is intimate and close within himself, and he created us to be close to him. This heavenly pattern endures in our everyday life and relationships. It is built into our creation and re-creation. The whole history of redemption can be summarized as God bringing those who were once far off near forever by the blood of his Son (Ephesians 2:13). He gets the glory, and we get fullness of joy in his presence (Psalm 16:11). Just as faith enables us to see that “the heavens declare the glory of God” (Psalm 19:1; see also Hebrews 11:3), so faith enables us to see how our natural desire for human closeness declares much about God.

Most of us would agree that this theology-of-nearness can be drawn from Scripture and has a place in our theological system. The question is, how important is it? Not all theology is created equal. Though equally true, not all its parts are equally significant. Love and mercy take precedence over sacrifice (Matthew 9:13). Our call to pursue others with peace is more prominent than our concern that we might be casting pearls before swine (Acts 20:24).

The question I want to consider is this: How important is Scripture’s teaching on relationship and closeness? If it is merely acknowledged, the teaching remains on our shelves and rarely informs daily life. If it is among the foundational themes, it changes everything.

The role that carries this theme in Scripture is our identity as priests of God. A priest’s work is to be in God’s house, enjoy his fellowship, and grow closer and closer to him.

The early appearance of priests and God’s closeness supports their theological prominence. Adam and Eve are not explicitly identified as priests, but they lived and worked in Eden, where earth met heaven, and God walked. For Hebrews familiar with the wilderness tabernacle, this was priestly language. God walked with his people in Eden (Genesis 3:8), and he dwelled and walked with his people through the tabernacle (Leviticus 26:12).

The priestly work in Eden was to “work” and “keep” the garden (Genesis 2:15), and the Levites were to “guard” and “keep” the tabernacle (Numbers 1:53; 3:36). At the very beginning, our purpose was clear. We were created to be like our Lord, to be close to him, to live with him in his house, and to participate in his abundant life. His presence and life coexist. You have one, you have the other.

Then Eden’s priests turned away from the Lord and entered into a consortium of death, sometimes known as the world-flesh-devil. The consequences were dire: they renounced life, were separated from God’s house on earth, and experienced death. Meanwhile, the priestly task of guarding the Edenic sanctuary was taken over by cherubim (Genesis 3:24).

Priests Who Are Pursued

Sin and separation would seem to be the logical end of the story — unless you remember that God’s plan was that his people would be with him, and that the Lord always accomplishes his purposes. Death entered the world but didn’t end it. Life persisted, and whenever life persists the Lord of life must be close.

His nearness, at times just barely out of sight, certainly had its more obvious and vivid moments. People like Enoch and Noah walked with God; Abraham was a friend of God. The priestly role persisted. If there was any doubt that the Lord would remain near to his people, he erased them by binding himself to them through covenant.

Then, as out of nowhere, Melchizedek appeared (Genesis 14:18), and he was later cited as evidence of the priestly line fulfilled in Jesus. We too are in that line.

Jacob was an unlikely priest. He was a deceiver, yet he rested at a place where heaven touched earth by way of a ladder (Genesis 28:10–17). To commemorate the place, he renamed it Bethel, or House of God, and laid a rock that would anticipate God’s later temple in Israel.

Jumping ahead to the exodus from Egypt, each head of household functioned as a priest during the first Passover: the people offered sacrifices and had a fellowship meal, and God came close. The entire nation was identified as “a kingdom of priests” (Exodus 19:6). Sin would not foil God’s plan for his people-priests. He would pursue them and be close to them.

We can mistakenly begin the priestly story when God’s tabernacle became a regular feature of Hebrew life and priests were temporarily identified as men from the tribe of Levi. The priestly role, however, was not new. The law from Sinai added details to the priesthood. Holiness, for example, became key for humanity. For God to be close, his people must be holy.

Holiness is about distance. The tabernacle was the center of God’s earthly presence. Gentiles who lived apart from God’s words were far from him. The unclean were also far. The clean could approach God’s house and bring sacrifices.

The priests who had been both cleansed and consecrated, or made holy, could actually enter into God’s outer apartment — the Holy Place. On the Day of Atonement, one priest could go farther in and represent the people at the place where heaven and glory were most fully concentrated on earth. The regulations of the tabernacle taught the people how they could draw near to the Lord.

The priestly tradition seems to end with Jesus. While Jesus fulfilled every detail of temple work and worship in his death and resurrection, references to God’s people as “priests” are scarce.

Paul wrote that he was “in the priestly service of the gospel of God” (Romans 15:16). Peter wrote that we are “a royal priesthood” (1 Peter 2:9). Revelation identifies us as “priests of God” (Revelation 5:10, 20:6). Yet even though these are among the few explicit references to priests, our priestly identity remains at the heart of New Testament teaching.

We track this identity through the more inclusive title saint, which substitutes for and enhances the title priest. Saints are holy ones, cleansed and sanctified by the blood of Jesus, invested with priestly robes of righteousness. They belong to God and are close to him. Now the pleasure of God’s presence is forever ours. We are even his very tabernacle, and he dwells in us (1 Corinthians 3:16). We are one in Christ and one with Christ. This goes far beyond any closeness we could have imagined.

It turns out to be a short step from a simple observation about human nearness to our mission as royal priests. Our interest in closeness exists because intimacy and fellowship are so fundamental to the character of God. The imprint of this nearness is so strong that it overflows through humanity and creation. It is why we struggle with extended times of isolation. God has established his kingdom by drawing near to us and uniting Jews and Gentiles in himself. Together, we grow in unity on the far side of the torn veil as God’s priests, his saints. From that intimate place, we are a people sent out toward others, to invite them to draw near to the reigning Lord.

This priestly closeness even reaches into our understanding of sin. Sin is lawbreaking, resulting in distance from God. As in human relationships, sin disrupts unity. Secrets and guilt create walls and isolation. Confession and renewed obedience serve to increase our communion with God. He draws near to us, and he invites us to draw ever nearer to him.

Priests are often underemphasized in our present discussions about prophet-priest-king. Perhaps their New Testament reputation inhibits our interest. But they are the human identity most attached to God’s nearness and presence. As such, the role has weight and priority. It is filled with implications for daily life and gospel invitations.

For example, daily life would be refreshed as we remember that God is inclined to be close to us. This has always been his intent and desire. He is close now. He doesn’t need to be won over by our religious efforts, and we don’t need the feeling of God’s closeness to be sure that he is, indeed, close. In our invitations to the world, we would take more time to describe the experience of aloneness, isolation, shame, distance from others, and distance from the Lord. Then we would listen to the God who comes to our door and knocks as he reclaims us to our role as royal priests.

In Christ, you are a royal priest. You were created to be close to God, and he has done it. “I am with you” is now a certainty and is the summary of all his promises to you.

Water from the Rock for Undeserving People – John Piper

How Often Do You Think About Heaven? – Nathan Knight