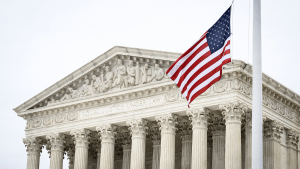 Here are nine things you should know about the most important court in the federal judiciary.

1. Article III of the U.S. Constitution establishes the federal judiciary, stating that “The judicial Power of the United States, shall be vested in one supreme Court, and in such inferior Courts as the Congress may from time to time ordain and establish.” While the Constitution establishes the Supreme Court, it permits Congress to decide how the Court should be organized. Congress is also given the authority to create lower federal courts as needed.

2. In 1789, the first session of Congress passed, and President George Washington signed into law, the Judiciary Act of 1789. This Act initially set the number of Supreme Court at six. But amendments to the Act changed that number six times—from a low of five to a high of 10—before settling at the present total of nine in 1869. The Act also granted the Court exclusive jurisdiction over cases in which a state was a party unless the case was between the state and its own citizens; the state and citizens of another state; or the state and aliens, in which cases the Court would have original, but not exclusive, jurisdiction. The Court was also given appellate jurisdiction from the U.S. circuit courts as well as the highest courts of the states.

4. In using the power of judicial review, the Supreme Court has developed a large body of judicial decisions, or “precedents.” The Supreme Court applies the doctrine of stare decisis (Latin for “to stand by things decided”) by following the rules of its prior decisions unless there is a “special justification” to overrule precedent. The result is that few precedents are overturned once they have been decided by the Court. For example, as the Congressional Research Service notes, in the Court’s 1992 decision in Planned Parenthood v. Casey, several Justices who voted to reaffirm Roe v. Wade had significant doubts about the quality of its reasoning. Yet they upheld Roe in part because they believed the Court’s legitimacy would suffer if the Court were to overturn a prior decision on a fundamental question of constitutional law. (Only 20 Supreme Court precedents have been overturned in the past 20 years.)

5. The Judiciary Act of 1789 also established a Chief Justice and multiple associate Justices. The Chief Justice is the most senior member of the court, regardless of how many years he or she has served on the bench. Only one of the Chief Justice’s responsibilities is specified in the Constitution: Article I, Section 3, Clause 6 states the Chief Justice shall serve as the presiding officer of the Senate during an impeachment trial of the President. The Chief Justice also serves as the presiding officer of the Court, the manager of the Supreme Court’s building and the overall operations of the Court, and as the head of the federal judicial branch of government. The role also, by federal statute, includes several extra-judicial responsibilities, such as being on the boards of three cultural institutions—the National Gallery of Art, the Smithsonian Institution, and the Hirshorn Museum.

6. The President nominates someone for a vacancy on the Court and the Senate votes to confirm the nominee, which requires a simple majority. The President can choose anyone he wants since the Constitution does not specify qualifications for Justices such as age, education, profession, or native-born citizenship. (A Justice does not have to be a lawyer or a law school graduate, but all Justices have been trained in the law.) Once approved by Congress, the Justices hold office as long as they choose and can only be removed from office by impeachment. The average number of years that Justices have served is 16.

7. The Judiciary Act of 1925 gave the Supreme Court certiorari power, the power to choose its own cases. The effect of this law was that the Supreme Court became primarily an arbiter of constitutional questions, leaving the U.S. circuit courts of appeals as the final authority in most federal cases. In a petition for a writ of certiorari, a party asks the Court to review its case. The Supreme Court agrees to hear about 100-150 of the more than 7,000 cases that it is asked to review each year.

8. For most of its history, no women or minorities served on the Court. Th first African-American Justice, Thurgood Marshall, was appointed in 1967, and the first female Justice, Sandra Day O’Connor, was appointed in 1981. In 2009, Sonia Sotomayor became the first Hispanic Justice. The only other African American to serve on the Court was Clarence Thomas, who succeeded Marshall in 1991. To date, there have been a total of four women on the Court (Justices Sandra Day O’Connor, Sonia Sotomayor, Ruth Bader Ginsburg, and Elena Kagan).

9. Eighty percent of the Justices that have served (91 of 114) have been Protestant. That total includes 33 Episcopalians, 18 Presbyterians, nine Unitarians, five Methodists, three Baptists, and one Lutheran. Thirteen Justices have been Catholic, eight have been Jewish, and one—David Davis—had no known religious affiliation. Following the retirement of John Paul Stevens in 2010, the Court had no Protestants until the appointment of Neil Gorsuch, who attends an Episcopal church.

When Members Leave: How Pastors Can Guard Their Hearts – Phil A. Newton

The Perfect Gift for Your Unbelieving Neighbor – Glen Scrivener