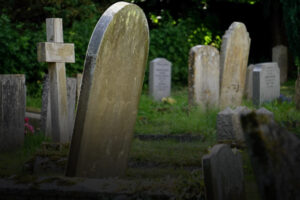 A few years ago, I visited the home of someone who had recently passed away. I remember an upstairs room where he kept an enormous collection of model cars. Each car was still in its original packaging. One entire wall was covered with cars on shelves. It was clear that the man had been an avid car collector and treasured his possessions. Somehow, though, at that moment the items seemed a bit unimportant.

I saw a kinship between this man and myself. I am also a collector (mostly of comic books instead of cars) and the experience made me think. My garage is similarly filled with boxes of comic books. Like his cars, my collection offers me temporary entertainment, but ultimately fails to offer something lasting. My visit to this man’s car collection put things into perspective for me.

In the years since, I’ve attended many funerals. Each funeral has been unique and special in its own right. Some were full church services with a small portion in the middle where the family got up and spoke. I’ve also been to funerals in public places which were not religious at all.

Inevitably, I find myself comparing and contrasting the various funerals. During some of the funerals, very little was said about the person who passed away. Instead, the family members would talk about their own feelings about the person. In other funerals, the person who died was described in great detail. I walked away feeling like I had known them, even if I hadn’t. At some funeral’s, people described the deceased person’s professional accomplishments, hobbies, or how much they loved their family.

I can’t help but reflect on my own life when attending these funerals. I wonder what people would say about me at my funeral. Would people talk about how many long hours I worked? Would they talk about how many comic books I had amassed? More importantly, would anyone mention that I was a Christian?

On more than one occasion I have been blessed to attend funerals of devout Christians. Their family and friends all got up and talked about how important their faith was to them. The officiating pastor even used the opportunity to present the gospel. But when I look at my own life, would that be the kind of funeral people would give me?

I hate to admit it, but I think there are many people in my life who, if asked to speak at my funeral, might be happy to tell some stories of good times we had together. But I think many wouldn’t even mention my faith. I hate to think that someone could know me and not know how important Jesus is to me, but I have to be honest.

If I am going to be remembered, I would like to think my love of God would be foremost on the things people thought about…
Click To Tweet

These funerals have been a convicting. I know this life is not all about how I am remembered. In fact, I know that if I were not remembered at all it would not be a big deal in the grand scheme of things. In the end, it is God who should be honored and remembered before me. But if I am going to be remembered, I would like to think my love of God would be foremost on the things people thought about. These sad events have been a blessing to me; a motivation to live a life which would demonstrate my love and commitment to Jesus.

How will you be remembered?

Rapid Response: “What Makes the Cumulative Case for God So Powerful?”

Rapid Response: What Does It Mean to Be a ‘Two-Decision’ Christian?