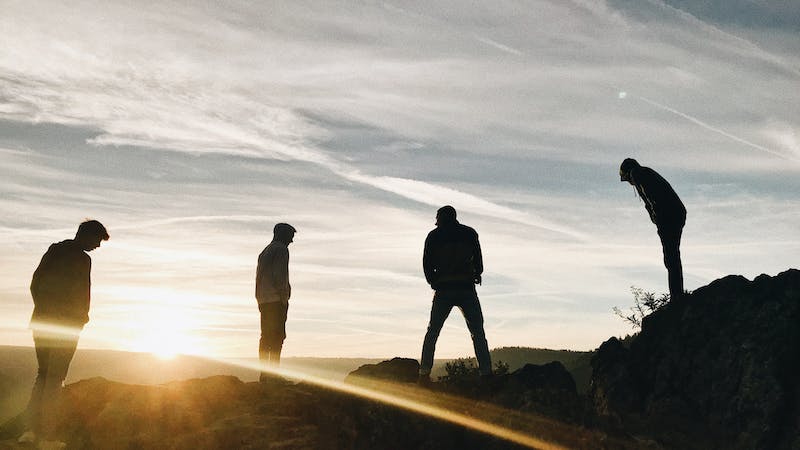 Friendship, especially among men, is something we lament when absent and yet often take for granted when we have it. Good brothers are hard to find, and surprisingly easy to squander. While we focus on the many battles before us, and behind us, and within us, we can forget the men we need beside us.

For a couple decades now, I have searched for men to follow Christ beside — friends who are closer than a brother (Proverbs 18:24). Over and over again, God has given me brothers who know my strengths and weaknesses, my fears, failures, and victories; brothers who are warm with compassion but will confront me to protect me; men whose hearts belong to Jesus and who have been conquered by grace. For my marriage, my family, and my ministry to prevail, I cannot afford to lead, love, or fight alone as a man. My wife and I both know I need other men. And we know she needs other Sarahs, women who “do good and do not fear anything that is frightening” (1 Peter 3:6).

If men do not have deep and abiding friendships with other men, we should make some serious efforts to find them — seeking out godly brothers, organizing time together, initiating with older and wiser men, discipling younger faithful men, bearing the significant costs of meaningful friendships. Good soldiers don’t stumble onto the battlefield. They prepare. They train. They count the cost. They set aside distractions. They lock arms.

King David, who lived much of his life in the trenches, knew the value of real brotherhood: “Behold, how good and pleasant it is when brothers dwell in unity!” (Psalm 133:1).

Because so many of us have seen it printed on greeting cards and coffee mugs during peacetime, we may miss the depth and cost of such unity. David was hunted by his predecessor, betrayed by his son (who murdered his other son), abandoned by his inner circle, and opposed by the people he had served so well. When he says words like good and pleasant, he does so with a mouth that has tasted the bitterness of disunity, hostility, and estrangement.

As Christians, this unity will not look the same for every man in every friendship, or even for the same man over a lifetime of friendships, but it will be rooted in one man: our one Lord, one Savior, one Treasure, Jesus Christ. Uncommon brothers share a common allegiance, a common mission, a common first love, because they share him. Who are those men for you?

David knew unity among brothers is not normal. And he knew where uncommon brothers come from.

More could be said, but as Derek Kidner notes, this kind of unity and brotherhood only comes from above — like oil down the head or dew from heaven. If we enjoy deep and abiding friendship with other men in Christ, God has done it. Think about that. If you have the kind of brothers David is describing, God mobilized that brotherhood — how you would meet, what would bind you together, the wars you would fight together, what would keep you from walking away. He poured the oil of his favor on you in friendship.

This means that if we want deeper, more serious friendships, we start by asking God. The most effective way for men to find the friends we need is to begin with serious time alone on our knees. We cannot force real friendship. This is not ultimately in our control. And in God’s wisdom, many good friendships will come and go, ebb and flow, and then ebb again. A few unusual friends may endure over decades.

So, if we find ourselves, like David, dwelling in unity with blood-bought brothers, what can we do to fight the battle well together?

Two Are Better Than One

George Whitefield (1714–1770) once preached on this kind of uncommon brotherhood from Ecclesiastes 4:9–12, which says,

Two are better than one, because they have a good reward for their toil. For if they fall, one will lift up his fellow. But woe to him who is alone when he falls and has not another to lift him up! Again, if two lie together, they keep warm, but how can one keep warm alone? And though a man might prevail against one who is alone, two will withstand him — a threefold cord is not quickly broken.

Whitefield said, “Woe be to him that is alone; for when he falleth, he hath not another to lift him up: When he is cold, he hath not a Friend to warm him; when he is assaulted, he hath not a Second to help him to withstand his Enemy.” He explained why two, in the eyes and plans of God, are truly better than one, and then taught us three ways uncommon brothers love each other in the trenches of life, marriage, family, and ministry: reprove, exhort, and defend.

Again, Ecclesiastes 4:10 says, “If they fall, one will lift up his fellow. But woe to him who is alone when he falls and has not another to lift him up!” One of the most precious (and severe) mercies of a brother is how he responds to our sins and failures. Many men fall into sin without another man strong enough, loving enough, or courageous enough to call him to repentance. Good men not only speak up when they see sin, but they love when others show them their own sin, however hard it may feel in the moment.

Every man can fall (1 Corinthians 10:12). You and I can fall. And if we live as if we cannot, we are far more likely to fall. And if we do fall, and we all inevitably fall in various ways, we need brothers who will confront us (2 Samuel 12:7–9), restore us (Galatians 6:1), and then walk with us back out onto the battlegrounds for holiness.

The preacher continues, “If two lie together, they keep warm, but how can one keep warm alone?” (Ecclesiastes 4:11). This may make modern men squirm (or even laugh), but that’s only because we have known so little of war. We’ve never woken up to a fellow soldier who froze to death overnight. Men of God know they need the heat of one another’s love for God. We need to be spurred on by one another’s passion, hard work, sacrifice, courage, and ambition for Christ. We don’t just need male friends; we need male friends on fire for God.

What men in your life consistently stir you up to love and good works (Hebrews 10:24)? What men charge you to walk in a manner worthy of God (1 Thessalonians 2:12)? What men exhort you, even daily, to keep you from being deceived by sin (Hebrews 3:13)?

Lastly, if we have uncommon brothers, we assist and defend one another. Ecclesiastes 4:12 says, “Though a man might prevail against one who is alone, two will withstand him — a threefold cord is not quickly broken.” Men fall alone on the battlefield who would not have fallen had another man been there. Our enemy loves to isolate a man from his unit, where he is exposed, vulnerable, defenseless. Wise men, however, do not wander out alone against the spiritual forces of evil (Ephesians 6:12), and they will not let their brother fight alone.

When the apostle Peter wrote to the persecuted church, believers under siege spiritually and socially, he wrote, “Above all, keep loving one another earnestly” (1 Peter 4:8). This is how the war will be won. We prevail by loving one another earnestly — monitoring weaknesses and vulnerabilities, meeting needs, watching blind spots, correcting errors and confronting sins, instilling hope and defying darkness together. When the fires of trial swell, we are and love to be our brother’s keeper.

True brotherhood, life-or-death friendship in the trenches, comes from God above, through Christ, but it does not only come to us as a blessing. Deep and sincere brotherhood extends the blessing outward and in every direction. Notice, again, what David says,

[Unity among brothers] is like the dew of Hermon,
which falls on the mountains of Zion!
For there the Lord has commanded the blessing,
life forevermore. (Psalm 133:3)

One reason we pursue real, deep, enduring friendships as men is because of how that kind of brotherhood nourishes our marriages, families, churches, and communities. Wives and children are led and cared for with greater affection and conviction. Churches are served and strengthened with greater selflessness and wisdom. Crises are addressed with greater humility, courage, and compassion. Workplaces and communities are filled with greater light and hope.

Everyone benefits when Christian men faithfully give themselves to one another, when uncommon brothers love one another in uncommon ways.