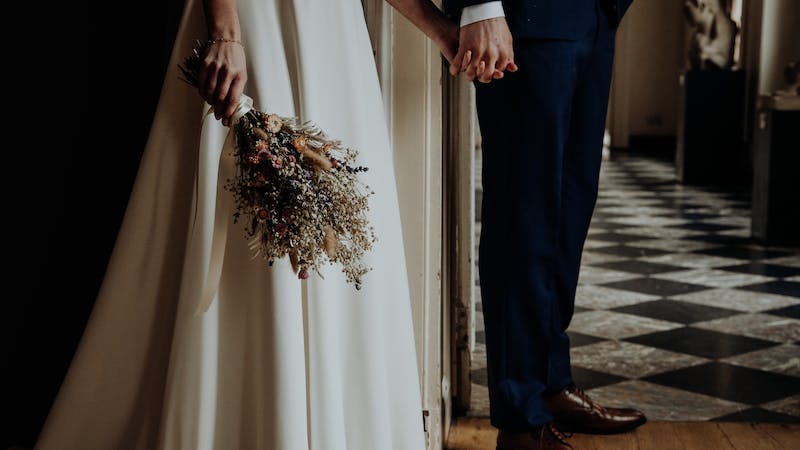 If you could model your marriage after one marriage in Scripture, which would you choose?

As blissful as the first chapters were for Adam and Eve, the honeymoon ends (and horribly) before we learn much about their marital dynamics. Isaac and Rebekah also have a romantic beginning (Genesis 24:67), but she eventually plots to deceive him (in order to fulfill God’s promise, Genesis 25:23). Jacob labored long and well to have his beloved Rachel but also married (and despised) her sister, Leah.

The noble Abigail won the heart of King David, but she was not his first wife, and David also fell into adultery (and worse) with Bathsheba. Esther is as worthy of imitation as any woman, but King Ahasuerus married her to spite the queen and then fell into Haman’s plot to destroy her people. And what husband can’t learn from the unfailing and unrequited love of Hosea? But his Gomer only models a wickedness wives should avoid at all costs.

God does give us marriages worth admiring and imitating, though. Despite the ways Abraham endangered his wife to protect himself (more than once), he and Sarah are commended by the apostles (Hebrews 11:8–12; 1 Peter 3:6). Ruth embodies a fearlessness and fidelity that won the heart of her equally worthy man, Boaz. And, of course, while Joseph may have doubted Mary when she first became pregnant, they loved each other, and their anointed Son, with great faith and devotion.

Many, however, miss a noteworthy and beautiful marriage buried in the apostle Paul’s letters, a marriage he may have known (and esteemed) more than any other, a marriage that had captured the attention and admiration of many in the early church.

Much of what we know and believe about marriage, at least Christian marriage (Ephesians 5:22–33; Colossians 3:18–19), we learn from the letters of an unmarried man (1 Corinthians 7:6–8). So, how did the apostle Paul have so much insight into marriage? Well, first, because his marriage counsel was “breathed out by God” (2 Timothy 3:16), and therefore wasn’t dependent on personal experience. More than that, he studied Christ and the church as God’s model for every marriage (Ephesians 5:22–33). But he also undoubtedly witnessed some remarkably good marriages.

One such couple seems to have won his heart as much as (and perhaps more than) any other, and not only his heart, but the hearts of churches everywhere. “Greet Prisca and Aquila,” he writes, “my fellow workers in Christ Jesus, who risked their necks for my life, to whom not only I give thanks but all the churches of the Gentiles give thanks as well” (Romans 16:3–4). In a world without social media, without television or magazines, without anything like the Internet, the fame of their love still spread far and wide and deep.

Both Luke and Paul go out of their way to highlight Priscilla (or Prisca) and Aquila as a married couple, not just as faithful individuals. Like almost no other couple in the Bible, neither is ever mentioned without the other. They are “Priscilla and Aquila,” one flesh, one remarkably fruitful force for good, one marriage worth studying and learning from. Their story is by no means prescriptive for every Christian couple everywhere and in every stage of life, but it ought to make us long for the kind of marital faithfulness and fruitfulness they demonstrated in their circumstances and stages of life.

Priscilla and Aquila were manifestly a man and woman of the word. The few who know their names remember them for stepping in to correct the gifted and influential teacher Apollos. Luke says of Apollos, “He was an eloquent man, competent in the Scriptures. He had been instructed in the way of the Lord. And being fervent in spirit, he spoke and taught accurately the things concerning Jesus” (Acts 18:24–25). And yet,

He began to speak boldly in the synagogue, but when Priscilla and Aquila heard him, they took him aside and explained to him the way of God more accurately. (Acts 18:26)

They heard Apollos, they took him aside, they explained the way of God more accurately — not just Aquila. While God had given them different callings as husband and wife, they lived and served together. And we would expect their marriage and ministry flourished as a result. How many marriages struggle and suffer because one spouse leaves serious Bible reading and study to the other?

Not every good marriage will look like Priscilla and Aquila’s, but every Christian marriage can aspire to immerse the relationship, daily and deeply, in the wells of Scripture. What if we allowed the words of God to revive our hearts and enlighten us with wisdom (Psalm 19:7), to reinforce our joy and purify our minds (Psalm 19:8), to strengthen our resolve and endurance (Psalm 19:9) in marriage? What if his voice sweetened our intimacy (Psalm 19:10)?

Before we learn about their faithfulness to the word, though, we meet them in suffering. When Paul came to Corinth, “he found a Jew named Aquila, a native of Pontus, recently come from Italy with his wife Priscilla, because Claudius had commanded all the Jews to leave Rome” (Acts 18:1–2). When Paul met them, they had just been driven from their home, simply for being Jews.

Paul then stayed to work and serve with them, and the church in Corinth experienced greater opposition and hostility (Acts 18:6, 12, 17). They eventually fled for Ephesus (where they met and instructed Apollos). Violent riots soon emerged against the church there too (Acts 19:23). We don’t know precisely what situation Paul was referring to, but he wrote to the Romans, “Greet Prisca and Aquila, my fellow workers in Christ Jesus, who risked their necks for my life” (Romans 16:3–4). Far from retreating into domestic safety, their marriage was well acquainted with suffering and ready for risk, conflict, and sacrifice.

Again, God doesn’t mean for every marriage to step into the same fires they did, but all Christians should expect, and embrace, suffering for the sake of Christ (2 Timothy 3:12). While we should strive to protect our marriages and families from evil, we should not protect ourselves from suffering, in love, for the faith and joy of others. Has the comfort and security of marriage and family kept some of us from obeying Christ and taking the right risks in ministry?

This glimpse of their life together comes and goes quickly, but it shouldn’t be overlooked. Paul chose to stay with Priscilla and Aquila, in part, because of the everyday work they (both) did to provide for themselves. “He went to see them, and because he was of the same trade he stayed with them and worked, for they were tentmakers by trade” (Acts 18:2–3). Their friendship and partnership with Paul were built over fabric, ropes, and tent posts — in other words, over ordinary work.

Without reading too much into their business, we can begin to see just how hard they both worked to survive and serve together. They gave themselves deeply to the ministry of the word, but that was not their full-time job. Having finally tasted real rest in Christ, they embraced just how much work faithful life in a fallen world requires.

How many of us quietly begrudge (or even loudly complain about) all the sweat and effort that marriage, family, work, and ministry require? Faithfulness (and survival) often will not require two full-time jobs outside the home, but hard, joyful, sacrificial work by both spouses will mark healthy and fruitful marriages.

Priscilla and Aquila not only served the church in various ways, but they welcomed the church into their home. We know that both in Ephesus (1 Corinthians 16:19) and in Rome, the church gathered under their roof. Paul writes to the Romans, “Greet Prisca and Aquila. . . . Greet also the church in their house” (Romans 16:3–5). These are small windows into their marriage, but real windows nonetheless, especially when you consider the opposition and hostility Christians often faced in the first-century world.

Might Paul have had Priscilla and Aquila in mind when he exhorted the churches in Rome, “Contribute to the needs of the saints and seek to show hospitality” (Romans 12:13)? Even if he didn’t, we know he personally experienced their hospitality (Acts 18:3–4), and in more than one home (Acts 18:18–19; 1 Corinthians 16:19). Regardless of whether he was thinking of these friends and their radical hospitality, we know he had us and our marriages in mind. Christian marriages are hospitable marriages because God commands all Christians, “Show hospitality to one another without grumbling” (1 Peter 4:9). And hospitality reveals the light within us (and our marriages) as much as any ministry (Matthew 5:16; 25:34–36).

We don’t have to hold church in our homes to be hospitable, but we do need to embrace the costs and inconveniences of consistently letting others in. Hospitality welcomes others in a hundred different ways, but Christian marriages should always be marked — everywhere and at every stage of life — by genuine and joy-filled hospitality.

The exchange with Apollos reveals another rare quality in Aquila and Priscilla: their willingness to confront error, even in a prominent and respected teacher. Apollos was not just another teacher, but “was an eloquent man, competent in the Scriptures” (Acts 18:24). He was a well-taught, passionate defender of the gospel. And Priscilla and Aquila were still willing to confront him when he was wrong. Embracing the necessary, healthy friction that comes with all correction, they spoke the truth in love (Ephesians 4:15).

And even in just one verse, we can see the love in their rebuke: “[Apollos] began to speak boldly in the synagogue, but when Priscilla and Aquila heard him, they took him aside and explained to him the way of God more accurately” (Acts 18:26). In love, they refused to let him continue believing and teaching wrongly. In love, they expended the effort and care needed to refine and realign his thinking. In love, they took him aside, rather than making a scene to humiliate him. Sometimes, correction must be public (Galatians 2:11). Far more often, however, love corrects privately (Matthew 18:15), at least initially (Matthew 18:16).

Oh, for more Christians (and Christian marriages) with the courage to confront error and sin with such honesty, love, and hope. As we will see, this kind of love, while difficult and even unpleasant in the moment, often bears disproportionate fruit. And oh, for more men (and women) like Apollos, who receive and implement good correction like he did.

Not only did Priscilla and Aquila set Apollos straight, but by clarifying and maturing his thinking they also blessed all the cities and churches he went on to visit, as “he greatly helped those who through grace had believed, for he powerfully refuted the Jews in public, showing by the Scriptures that the Christ was Jesus” (Acts 18:27–28). He was able to powerfully refute the Jews and show them the truth and beauty of what the Scriptures actually teach and promise about Jesus in part because of the faithfulness and boldness of Priscilla and Aquila.

We taste that same fruitfulness when Paul says, “Greet Prisca and Aquila . . . to whom not only I give thanks but all the churches of the Gentiles give thanks as well” (Romans 16:3–4). All the churches of the Gentiles had heard of this marriage — of their faith, their courage, their wisdom, their hospitality, their suffering, their love. Not every faithful marriage will (or should!) have the kind of far-reaching impact they had on the early church, but every faithful marriage should strive to have some tangible, sacrificial, eternal impact on the church.

All Christian love is a widening love, wanting to draw more into our faith, hope, and joy. True love is not exclusive, selfish, or isolated, but generous, compassionate, servant-hearted, risk-taking. Love says, “As we have opportunity, let us do good to everyone, and especially to those who are of the household of faith” (Galatians 6:10).

Priscilla and Aquila did great good together, and to all, especially to those who shared their joy in Jesus. And in doing so, they left not prescriptions or commands, but a legacy and an aspiration for marriages like ours.

He Gave Himself for You

Secret Allies in the Human Heart: The Advantage We Have in Evangelism – Jon Bloom