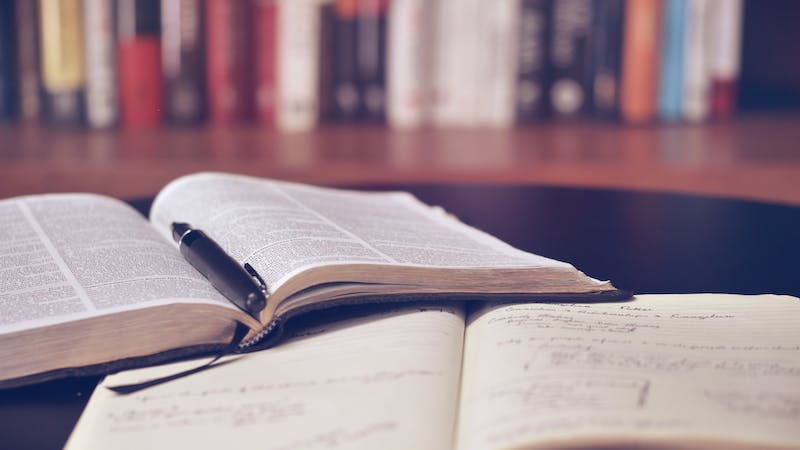 “No one ever spoke like this man!” Even his enemies had to admit it.

Jerusalem was teeming with travelers during the Feast of Booths, and Jesus was teaching in the temple. A new excitement was in the air. And controversy. Some said he was a good man; others thought he was leading people astray (John 7:12).

The Pharisees overheard the muttering and conspired with their political rivals, the chief priests, to send officers to arrest Jesus, if he were to misspeak. The officers were there, on the last day of the feast, when Jesus stood up and cried out, like no one else would dare,

If anyone thirsts, let him come to me and drink. Whoever believes in me, as the Scripture has said, “Out of his heart will flow rivers of living water.” (John 7:37–38)

The people were first stunned, then divided. Some wondered if this was the Prophet who was to come. Or even the Christ himself. Others argued back that David’s heir would not come from Galilee. The officers, equally stunned, returned with empty hands, and open mouths, to the chief priests and Pharisees who ask, “Why did you not bring him?”

John then reports, as he loves to do, a word on the lips of Jesus’s enemies that is even more true than they know: “No one ever spoke like this man!” (John 7:46).

Indeed, the words and teaching of Jesus are unparalleled, even as a tension runs through his ministry, from start to finish. Time and again, his fame spread because of his miracles. Word spread like wildfire because of his works. People wanted to see what the Gospel of John calls “signs.” Yet Jesus never self-identified as a miracle-worker. He was a teacher whose words amazed his hearers as much as his healings. And more.

Nicodemus captures it well, even though he still has much to learn, when he comes to Jesus at night in John 3: “Rabbi, we know that you are a teacher come from God, for no one can do these signs that you do unless God is with him” (John 3:2). The signs point. The works that dazzle the eyes are meant to open ears to words from a teacher come from God.

Himself the Word of God, Jesus’s words were like the words of no other man, before him, in his day, or since. He opened his mouth to teach, and soon “all the people were hanging on his words” (Luke 19:48).

Even at age twelve, two decades before he went public as a teacher, his words amazed and astonished as he sat among the teachers in the temple: “all who heard him were amazed at his understanding and his answers. And when his parents saw him, they were astonished” (Luke 2:47–48).

Significantly, Matthew reports, at the end of his famous Sermon on the Mount, “when Jesus finished these sayings, the crowds were astonished at his teaching, for he was teaching them as one who had authority, and not as their scribes” (Matthew 7:28–29). And when he taught in his hometown, Nazareth, “they were astonished, and said, ‘Where did this man get this wisdom and these mighty works?’” (Matthew 13:54).

When he moved on to the next town, Capernaum, “they were astonished at his teaching, for his word possessed authority” (Luke 4:32). And when it seemed to matter most, during his passion week, with the chief priests trying to trip him up, he not only answered flawlessly but went on the offensive. “And when the crowd heard it, they were astonished at his teaching” (Matthew 22:33).

Even more than “amazed” and “astonished,” the Gospels report that Jesus’s hearers often marveled. The people, and his own men, “marveled” not only at his displays of power (Luke 8:25; 9:43; 11:14) but also his teaching. They “marveled at the gracious words that were coming from his mouth” (Luke 4:22).

When the Pharisees “plotted how to entangle him in his words” (Matthew 22:15), they did not yet know what a fool’s errand that would be. They thought they might get him with the politically dangerous question, “Is it lawful to pay taxes to Caesar, or not?” (Matthew 22:17). Jesus, aware of their malice, called them on it: “Why put me to the test, you hypocrites?” (Matthew 22:18).

Luke reports the upshot: “they were not able . . . to catch him in what he said, but marveling at his answer they became silent” (Luke 20:26). He could open his mouth and make them put their hands over theirs. Which brings us back to John 7 and the clearest teaching from Jesus as to what made his teaching so marvelous.

What Was It About His Words?

In John 7, as Jesus taught during the feast, the establishment “marveled” and asked, “How is it that this man has learning, when he has never studied?” (John 7:15).

Jesus then answers with the most focused and penetrating words he has to say about his words. Here he pulls back the curtain, as it were, and teaches about his teaching. In doing so, he gives us a profound insight, in three layers, as to what sets his words and teaching apart. His teaching, he says, is not from me, not of me, and not for me.

Not from Me: Teaching Not His Own

First, Jesus’s not operating under his own authority is a pronounced theme in the Gospel of John. “The Son can do nothing of his own accord,” he says (John 5:19). Again, “I can do nothing on my own” (John 5:30). He is not autonomous, as modern people like to pretend. “I do nothing on my own authority,” he says in John 8:28, “but speak just as the Father taught me.” So also in his coming — from above — he does not come “of my own accord” (literally, “from myself,” John 7:28; 8:42). Rather, his words as a teacher are rooted in the mission of the one who sent him.

Jesus does not teach “from himself” — from his own authority, as his own source — but in the authority of another: his Father. And so, here in John 7:17, he makes it clear that he is not “speaking on my own authority.”

Pastors and teachers today do well to take note. If Christ himself speaks not on his own authority, then how much more do we not? The call to Christian teaching — to teach as the God-man did — is not a call to share our opinions or preferences or latest hot take. Christian teaching is increasingly at odds with the pattern of teaching in the world and its penchant for self-expression. God gave us a Book. Like Christ himself, we do not teach “from ourselves.” We are stewards and heralds of the message of another, of Christ, just as he modeled for us in receiving, and teaching, the words of his Father.

Not of Me: Teaching Not Even His

The distinction between “not from me” and “not of me” is subtle but presses the issue to another degree. Jesus opens in John 7:16 with this puzzling statement: “My teaching is not mine, but his who sent me.” How could your teaching not be yours?

The question in verse 16, we might say, is not authority but ownership. It’s one thing to point to a source (or authority) outside oneself; it’s another to then take it a step farther. Not only is my teaching not from me, Jesus says; but my teaching isn’t even mine. A teacher might point to another as the source of his teaching and yet still claim his teaching, once it has come from his mouth, to be his. Jesus does not.

Again, if true for Jesus, how much more so for us today who teach in his name? We might readily admit that our teaching is “not from me” — but from God, from Christ, from the Book — and then feel a good deal of ownership about my teaching, my content, my “intellectual property.”

How prone are we to assume that once we have received God’s words, and studied them, and found our way to teach them, that then in some sense, even admitting they’re not from us, our teaching is ours. But not so for Jesus. Here is a kind of openhandedness about “his teaching” that is unusual, even strange — though it comes into focus once he takes us to the bottom.

Not for Me: Teaching Not for His Own Glory

Finally, in John 7:18, Jesus bring us to the bedrock: “The one who speaks on his own authority seeks his own glory; but the one who seeks the glory of him who sent him is true, and in him there is no falsehood.”

Beneath this enigma of “his teaching” not being “his,” in some sense, is bracing clarity: who gets the glory? Whose honor is it for? Whose glory do I seek with my words, my teaching? In the world, the answer is often painfully plain: the teacher seeks his own. He teaches for his own glory, his own benefit, his own advancement, his own self-expression. Tragically, even among some teachers in the church, the same can be true. Our hearts are prone to wander, pastors included, and gravitate to the pursuit of our own private benefit and selfish interests.

Yet the God-man himself — fully God, yes, and among us as fully man — seeks not his own glory in his teaching but pursues the glory of the one who sent him. And again, if so for Christ, how much more for those today who teach in his name?

John 7:18, from the lips of Christ himself, may well be the single most important insight into what made the words and teaching of Christ so powerful. Why were the crowds so often amazed and astounded, why did they marvel, why did they hang on his words, and say, “No one ever spoke like this man”? Because no man ever lived for the name and glory of God like the man named Jesus (John 17:4, 6, 26). And what that consecration of mind and heart brought to his words made a difference everywhere he went, and every time he taught.

At bottom, Jesus, as the ultimate human, did not seek “his own glory” but the glory of him who sent him. On this, then, he professed that even his teaching was not his but his Father’s, even as he did not teach “from himself” but on his Father’s authority.

For Christians, “for the glory of God” is not a throwaway phrase. It is profoundly relevant, and transforming, on a daily and weekly basis in how we live, and how we speak. Jesus’s teaching — even more convincingly than his spectacular works — demonstrated to the world that he was true. His enemies could sense it, and couldn’t help but admit, “You are true and do not care about anyone’s opinion. For you are not swayed by appearances, but truly teach the way of God” (Mark 12:14). “Teacher, we know that you speak and teach rightly, and show no partiality, but truly teach the way of God” (Luke 20:21).

So too for true teachers today. Their words are not from them, not of them, and not for their own glory, which in time may well make God’s people marvel as he gives them ears to hear.

Where Will They Learn to Work? Teaching Children a Lost Ethic – Mary Beeke