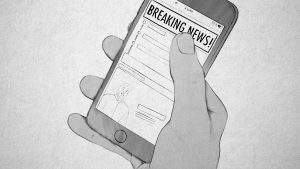 The COVID-19 pandemic and protests of racial injustice, and the media whirlwinds surrounding both, have heightened an emerging tension for Christians. We need knowledge and information to act rightly and wisely, yet excessive news consumption often creates anxiety, division, quarrelsomeness, and frustration.

In a media environment with limitless choices of information, most with some degree of bias or agenda-driven bent, Christians need more discretion than ever in our “knowledge diets.”

Journalism in a Fallen World

Christians must recognize how severely much news media today works against our ability to think well and cultivate wisdom.  In his 1985 book Amusing Ourselves to Death, Neil Postman demonstrated that a change in medium harmed the nature and content of our public conversations. As our culture transitioned from primarily consuming written news to consuming visual images on television, discourse became more superficial and volatile, preferring hasty provocation and extremism to nuance and moderation. This transformation—since accelerated by the internet—has fundamentally broken our discourse.

Still, as much as the media landscape is a minefield of misinformation, manipulative clickbait, and partisan rants, good journalism remains. Finding it requires intentionality and discipline, yet it can guard us against a frenzy that undermines our ability to trust anything. To this end, I believe it’s helpful to assess media sources through a grid of biblical virtues.

God detests falsehood and desires Christians to likewise detest it (Prov. 13:5). While we have developed some awareness of the presence of falsehood on social media, we must also be wary of its presence in more established media. The fast pace of the news cycle today often makes truth and accuracy—even for the most professional and seasoned journalist—challenging. God wants us to discern fact from spin. Further, uncritically hearing and accepting falsehood is not a blameless act (Prov. 17:4). We should seek sources committed to presenting information truthfully and ideas honestly, even when they undermine the source’s—and our own—preferred narratives.

We should seek sources committed to presenting information truthfully and ideas honestly, even when they undermine the source’s—and our own—preferred narratives.

Scripture speaks often of sober-mindedness as a fruit of mature Christians (1 Peter 1:13; 1 Tim. 3:2; Titus 2:2). These verses suggest that Christian wisdom is as much about what we choose not to say as about what we do say. As Proverbs 17:27 puts it, “Whoever restrains his words has knowledge, and he who has a cool spirit is a man of understanding.” We should seek media sources that seek to say only what the facts permit, drawing the supportable conclusion rather than the desired conclusion. Find sources that go where the facts lead, rather than sources that use facts selectively to fuel a predetermined narrative.

One of the most significant effects of increasing polarization has been increased tribal certainty that one’s preferred side of a debate is right—and everything the other side offers is wrong. Be wary of media sources that assume this posture. As Christians called to live and think humbly (Eph. 4:2), we must be willing to have our worldly paradigms shifted and bubbles popped, even when it’s uncomfortable. We should seek sources that embrace the enduring complexity and uncertainty of public affairs, favoring nuance over simplistic “hero and villain” narratives. In this we resist being “wise in [our] own sight” and we avoid tribal blind spots, acknowledging instead the pervasive effects of sin on any side of a public debate (Rom. 12:15–16).

Find sources that go where the facts lead, rather than sources that use facts selectively to fuel a predetermined narrative.

God hates quarrelsomeness, derides rage (Ps. 2:4), and calls us to make peace (Matt. 5:9). In How the Nations Rage [20 quotes], Jonathan Leeman says the Christian’s posture toward public affairs should reflect a “strange and winsome confidence” in God’s redemptive history, rather than a desperate desire to dominate worldly matters. Quarrelsomeness infects the soul by undermining this confidence in Jesus, and it infects the church through disunity. Peacefulness, of course, contrasts sharply with the tone of much media, especially certain cable news shows that have monetized outrage as a primary mechanism for entertaining and retaining viewers. Tuning in to these shows is unlikely to profit a Christian.

As Postman argued, the written word is uniquely suited for active consumption of logically ordered facts and ideas, within context. This contrasts especially with passive consumption of digital images and videos, which are less orderly and more easily divorced from context.

Most modern media sources monetize clicks. More revenue is correlated with more eyeballs on their pages. These sources benefit when readers never make it past the first paragraph, instead proceeding in distraction to the next headline on the next page. Resist this design. Wise media consumption requires more context and nuance than headlines provide, especially ones crafted to be misleading or unduly provocative. Consider sources that rely more on subscription revenue than on fleeting clicks.

Read sources that reflect multiple viewpoints of an issue, and avoid sources that interpret events only through tribal lenses. Test sources by asking: Is this source willing, when appropriate, to criticize its favored party, individual, or cause? Is it willing to criticize mine? Or, by contrast, does it repeatedly infer assumptions in favor of its allies and against its enemies? Note here an important distinction: Many sources present their commentary according to a demonstrated philosophical or theological (rather than partisan) bent, and this can be helpful. TGC, for instance, publishes resources that help those with a Christian worldview process current events and other topics through that lens.

Recognize the place of media consumption in your knowledge diet and the risks of excessive consumption. Carefully select a few trustworthy sources to regularly check, rather than bouncing passively across the internet. It may also be helpful, in the age of the 24-hour news cycle, to select at least one publication that publishes less frequently than daily, opting for reflective analysis rather than hasty, always-reacting-to-breaking-news coverage.

We were created to live as redeemed people within our spheres of influence, not to bear the burden of a world’s worth of bad news, merely because it is technologically available to us.

Postman argued that technology has introduced the possibility of easy access to information that we simply do not need to know and cannot do much about. As much as 21st-century Christians should avoid isolation from the injustices of the wider world, it is wise to focus on what is within our power and calling to address. We were created to live as redeemed people within our spheres of influence, not to bear the burden of a world’s worth of bad news, merely because it is technologically available to us.

All of this matters not only for our personal sanity in a frenzied news world, but also for our Christian mission. We should seek media sources that help us live effectively as disciples and disciple-makers. Discernment (or lack thereof) in news media consumption can mean the difference between wisdom or foolishness—which means it is a critical issue for Christian witness in today’s world.