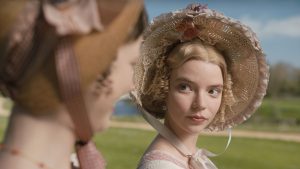 For the past three months, most movie theaters have been closed. Who knows when they will fully reopen. But in the era of streaming, that hasn’t stopped movies from being released and people from watching them. The number released in the first half of 2020 may be less than usual, but the quality has been surprisingly high.

The 10 films I highlight below are excellent new releases which I think have redemptive qualities Christians can appreciate. As always with lists like this, please use discernment and do your research regarding content. Most of the films below are more appropriate for adults than families.

Watching movies during a pandemic has its pros and cons. On one hand, I often feel sad watching movies these days, as invariably they remind me of the now-distant, pre-pandemic past (the frequent concert scenes in the hilarious Eurovision Song Contest, for example). On the other hand, movies offer perspective—reminding us of the pain, longing, and hope that characterize humanity in every season. The films I recommend below fall in the latter category. Even if they aren’t “escapist” in the feel-good sense (some of my recommendations here might be better for that), they can momentarily direct our focus away from our immediate concerns in a way that attends, lovingly, to the struggles of others.

Ostensibly inspired by the Harvey Weinstein sex abuse scandal—and the corrupt systems of silence and ambition that allowed such an “open secret” to persist for so long in Hollywood—Kitty Green’s film is harrowing in its depiction of the ease with which humans can dehumanize each other. A “day in the life” narrative of a low-ranking female assistant (Julia Garner) to a Weinstein-esque film executive (whom we never see in the film), The Assistant contains eye-opening, bracing insights into how powerful people can manipulate those around them to ignore or cover up abuse rather that report and expose it. For Christians—who of all people should seek to dismantle rather than perpetuate cultures of abuse—this is an important film to watch. Rent on Amazon.

This Netflix documentary is hard, but important, to watch. It follows the IndyStar reporting that uncovered the extensive sexual abuse of U.S. Gymnastics team doctor Larry Nassar, as well as the broader culture of abuse within the world of elite competitive gymnastics. The film prominently features Rachael Denhollander (watch her powerful testimony at Nassar’s sentencing hearing), who last year published a memoir about her experiences (What Is a Girl Worth?). Among other things, the film (directed by Bonni Cohen and Jon Shenk) is an inspiring reminder of the power of good journalism to expose corruption, advocate for the vulnerable, and bring truth to light. Watch on Netflix.

You don’t have to agree with everything in Spike Lee’s latest “joint” (as he calls his films) to appreciate how bold, ambitious, and genuinely moving it sometimes is. Part war film, part heist thriller, part political protest, Bloods is a very full (2.5 hours) and intense experience. Lee explores everything from racism, trauma, and the politics of Vietnam, to friendship, fatherhood, and forgiveness. If it’s messy at times and hard to watch at others (beware extreme violence and language; this is not a film for families), it is mostly because the characters and history Lee explores are anything but neat and tidy. Watch on Netflix.

If the feverish pitch of online polarization leaves you feeling hopeless for humanity, Driveways is a good reminder that on the level of neighborhoods and local community, the picture is often more hopeful. Andrew Ahn’s quiet film is a profound portrait of the beauty of proximate relationships—in this case an unlikely friendship between a young Asian American boy (Lucas Jaye) and his elderly veteran neighbor (Brian Dennehy in one of his final roles). In times of cultural crisis, narratives like this remind us that change often happens locally, through the people we get to know, and learn to love, right next door. Rent on Amazon.

Autumn de Wilde’s 2020 take on Jane Austen’s classic is quirky, contemporary, beautifully made, and well-cast. English-Argentine actress Anya Taylor-Joy perfectly captures the iconic snobbery of the titular character, while also imbuing her with moral complexity and an openness to correction that ultimately allows for change. Johnny Flynn also shines as Mr. Knightley, whose gentlemanly virtue includes—importantly—a willingness to speak the truth in love, even when it stings. The film is colorful, vibrant, and uplifting, with bonus points for the soundtrack’s repeated rendition of “How Firm a Foundation,” sung by British folk artist Maddy Prior. Rent on Amazon.

Kelly Reichardt is one of the most interesting indie filmmakers working today. Her films (like Old Joy, Wendy and Lucy, and Meek’s Cutoff) are certainly slower and more open-ended than mainstream Hollywood fare, but they have much to offer the thoughtful and patient viewer. Like many of Reichardt’s films, First Cow explores the elusive beauty of relational connection in a world that can feel isolating and cruel. Set in the 1820s Pacific Northwest frontier, the film is framed (literally, with a 4:3 aspect ratio) more like a painting than a film, inviting viewers to bring their own interpretive eyes to its subtle imagery and thematic portraiture. Is the film about America? Capitalism? Friendship? Time? Yes, and more. Watch on Amazon.

Though technically not released in the first half of 2020 (it’s out today on Apple TV+), Greyhound is too noteworthy to not include in this list. The World War II naval action film, starring and written by Tom Hanks, is a concise little film (91 minutes), based on a 1955 novel. Hanks plays a naval captain leading an Allied convoy of ships across the dangerous Atlantic without being sunk by a wolf pack of Nazi U-boats. Even if the film feels minor compared to great naval dramas like Master and Commander or Das Boot (or even Hanks’s own Captain Phillips), it still features a commanding performance from its ever-watchable leading man—whose character in the film often prays and quotes the Bible (e.g. Heb. 13:8, Prov. 3:6). Watch on Apple TV+.

This 40-minute documentary-fiction hybrid is a gorgeous and empathetic offshoot from Terrence Malick’s 2013 film To the Wonder. A collaboration between photographer/filmmaker Eugene Richards and actor/producer Javier Bardem, the film is essentially a collection of vignettes as Bardem—in character as his “Father Quintana” priest from Wonder—has conversations with various marginalized people in a small Oklahoma town. Though Bardem is a priest “character” and the people he interacts with are just themselves (non-actors worn down by various traumas), their largely unscripted encounters capture the power of pastoral, Christlike presence with society’s outcasts. Watch on demand.

I’ll likely remember this as the last pre-COVID-19 movie I saw in a theater. Which is a shame, because it should be memorable for other reasons. Directed by Gavin O’Connor (Warrior) and featuring one of Ben Affleck’s best acting performances, The Way Back is much more than just a basketball movie. As I wrote in my TGC review, it’s a movie “about second chances, redemption, and renewal; the path back to life after descending to the depths—not just for a sports team that has fallen on hard times, but also for a man and his family who have fallen into despair.” Rent on Amazon.

The Belgian brothers Jean-Pierre and Luc Dardenne are some of the most moral filmmakers working today. Their intimate, handheld shooting style and observational posture creates a deeply empathetic gaze that refuses to make easy heroes or villains. Though their latest, Young Ahmed, is not one of their best films, it’s still formidable and offers much fodder for moral reflection. The story of a radicalized young Muslim and the people in his life perhaps too willing to give him grace, Ahmed poses many difficult questions—about the nature of evil, rehabilitation, and the limits of empathy—that it leaves the audience to answer. Rent on Amazon.