Skip to content
The Gospel Coalition
Curator
No Comments 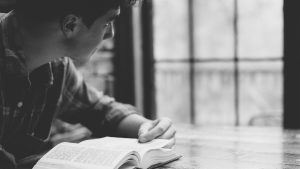 The wisest person isn’t always the most experienced. I had to learn that the hard way.

I graduated from high school as an evangelical kid—innocent enough to feel at home in church, yet insecure enough in that innocence to feel I was missing out on something. I wanted to add a layer of toughness to my skinny frame, thinking that would make me more interesting. So I joined the Marine Corps. There was a reserve unit just outside my hometown, a tank unit, so I could drive tanks on the weekends and be a college student during the week. Wahoo! I’d be a manly man who could strut and say things like, “Back when I was in the Corps . . .”

I remember teargas training. As the room filled with teargas, the drill instructor started marching around the room and making guys take off their masks. When he came back by and showed you his fist, you could put your mask back on. It went fast enough that you could hold your breath until he returned. Then, once your mask was on, you would plug the filters with your hands and blow out hard. This would clear all the gas out of your mask and you could breath in filtered air. Easy peasy.

Things started out alright for my group. We took off our masks obediently and held our collective breath. A minute later the drill instructor gave me the signal to put my mask on. I was done. I just needed to put on my mask and clear it.

But then I started thinking, How many people can say they’ve been teargassed? How many skinny, Christian kids from Idaho have gone through this? The thought continued: Now I know what it’s like to have teargas on your skin and in your eyes, but what would it feel like to have teargas in your lungs? The resolution followed: Maybe I should just take a little sip of the teargas before putting my mask back on. Because then I would know; I would have that experience; I would be wiser.

The wisest person isn’t always the most experienced.

So, I took just one little sip.

Sure enough, my lungs lit on fire and I exploded into a fit of coughing. It felt like napalm had been poured down my throat. Panicking, I pulled on my gas mask quickly, but I had no air left in my lungs to clear the mask. All I could do was suck in the teargas now inside the mask. Total panic set in and I ripped my mask off, thinking I just needed to run for the door and be free.

But I pulled myself together, got my mask back on a second time, and, with a good deal more retching and gagging, breathed through the trapped teargas until I started getting relatively clean air from the filters.

It was such a weird impulse to succumb to. I’ve never told that story and had someone say “Lucky you!” It’s usually more like “Why?” It was a dumb thing to think and an idiotic thing to do. But at that moment—and I know this sounds ridiculous—it seemed like an opportunity. An opportunity to do something that would distinguish me from everyone else. To be that much more impressive because I had experienced something that most had not.

Such stupidity is a fundamental error that plagues us all, going back to our first parents.

When the serpent tempted Eve, he told her that when she ate the forbidden fruit her eyes would be opened, and she would be like God, knowing good and evil (Gen. 3:3). The power of the serpent’s temptation was the idea that just tasting that fruit would open her eyes and make her wise. She would become distinguished by her experience. And to that temptation she succumbed.

How easily we can feel embarrassed by all the sins we haven’t committed!

This type of temptation still pulls at each of us with an incredible power. We feel that tasting a forbidden thing will bring us greater wisdom and make us more impressive. In fact, think of how easily we can feel embarrassed by all the sins we haven’t committed! We can actually become ashamed of our own innocence. Who wants to be naïve and inexperienced? How many Christian kids are embarrassed by their virginity, even though they’re convinced they’re right in preserving it until marriage?

This principle applies across the board—to men and women, young and old. But let me address men for a moment, since godly masculinity is a particular burden of mine.

The world, the flesh, and the Devil all want us to think that a real man has tasted it all. He’s gotten drunk and stoned. He’s slept around, and gotten into numerous fights. In short, he’s everything that a Christian isn’t supposed to be. (And if he gets saved, he has an exciting testimony to share!)

Does experience with sin make you wiser or more foolish?

The world defines a man as one who does what God says not to do. According to the world, manliness is Christlessness.

This is a point that must be driven home: worldly manliness is a God-forsaken mess. The church can’t afford to waste time looking longingly over the fence at the lives of unbelieving men. If we can’t see through this most fundamental lie of the world, is it surprising we have such a hard time conceiving of a masculine Christianity? The idea that tasting sin will make us into greater men is as idiotic as thinking that sipping teargas will make you wiser.

There’s nothing wrong with having a boring testimony.

Regardless of how much or how little experience you have with sin, it is enough. There’s nothing wrong with having a boring testimony.

Don’t confuse poison with wisdom. Wisdom doesn’t come from sipping sin, but from drinking deeply of God’s Word and letting it become part of you. That is the experience that truly matters.

How Can I Know My Decisions Glorify God? – Leah Jolly