The first presidential inauguration I can remember was George H. W. Bush’s in 1989. I was in the fourth grade and we watched the grainy footage on the classroom television. Politics wasn’t really on my radar as a 9 year old, but when Bush took the stage and began to speak, I distinctly remember being overwhelmed by this thought: “I wish he was my dad.”

I grew up without a father. The path before me from boyhood to manhood was unpaved and directionless. So when I saw Bush give his acceptance speech, I felt a surprising sense of longing. Because I had no established image for what a man could or should be, I saw Bush, distinguished and victorious, and believed it to be as good an image to bear as any. The writer Chris Hedges notes that this sort of thing comes about because those we perceive as heroic figures “become our vicarious selves. They do what we cannot. . . . They garner fame and vanquish their anonymity.” This is an apt description of how I felt that day in 1989.

Three decades later, a reversal has taken place. I no longer desire the paternal care of presidents; I demand they embody and express my ideologies and preferences. While I’m uninterested in bearing their image, I do want them to bear mine in some ways. I’m not alone in this distorted desire. Despite our stated commitment to the democratic process, when political winners do not embody and express our ideals, we tend to denounce and disown them. Only one week into the new year, as chaos unfolded in Washington D.C., we saw just how far down this destructive path some are willing to go.

We’re desperate for a familiar and reassuring resemblance between ourselves and those charged with leading us. When such a resemblance does not exist, we’re up in arms; some go as far as to take up arms. This poses an interesting and important challenge for Christians as we try to engage politics faithfully and responsibly.

Image-bearing is a central idea in the Bible. It begins on page one, when “God created man in his own image, in the image of God he created him; male and female he created them” (Gen. 1:27). The Hebrew word for “image” is tselem, which indicates far more than physical resemblance. Being made in the tselem of God means humans are to embody and express the essence of God. In the ancient world, all gods had tselems, usually in the form of temples, shrines, and statues. But Yahweh, the one true God, imbues his tselem solely in humans. Thus his clear instructions against making images or idols of any kind (Ex. 20:4; Deut. 4:16; etc.).

We’re desperate for a familiar and reassuring resemblance between ourselves and those charged with leading us. When such a resemblance does not exist, we’re up in arms; some go as far as to take up arms.

But what does this have to do with Christians and politics?

The religious leaders of Jesus’s day posed a politically charged question intended to corner him in an impossible situation: “Is it lawful for us to give tribute to Caesar, or not?” (Luke 20:22). At the time, the Roman Empire ruled and their taxation policies were extreme. Giving tribute to Caesar was costly and unjust.

This is an image-bearing question from the religious leaders. Giving tribute to Caesar would mean embracing the image of Rome and affirming its right to rule, however unjust. Withholding tribute would mean embracing the image of the most zealous Jewish nationalists, prepared for battle in order to overthrow the Roman enemy. This is a tension between two opposing political views. Whose image will you bear? Rome or Israel? The empire or the people?

While our circumstances obviously differ from those of Jesus’s day, we can relate to the tension between opposing political views. Whose image will you bear? Republican or Democrat? Liberal or conservative? Questions about which political ideologies, parties, and candidates are, ultimately, questions about image-bearing.

So how are Christians to respond? Jesus points the way: “‘Show me a denarius. Whose likeness and inscription does it have?’ They said, ‘Caesar’s’” (Luke 20:24).

A denarius was a Roman silver coin, often used for paying taxes. On it was an engraved image of Tiberius Caesar, along with the inscription, “Tiberius, son of the Divine Augustus.” Adhering to God’s command against deified images, Jews at the time did not carry around the denarius; they used a copper coin as a substitute for daily commerce. But Jesus specifically asks for a denarius in order to make his point clear: “Whose eikon [the Greek word for ‘image’] is on the coin?” They answer, “Caesar’s.” Jesus responds:

The image on the coin is Caesar, so give the coin to him. But remember Genesis 1:27? “God created man in his own image.” Jesus’s Jewish audience knew that Caesar, despite his claims of divinity, was just a man. While Caesar may lay claim to coins, only God can lay claim to the humans who bear his image. Jesus is confronting our tendency to want to bear the image of a temporal earthly kingdom. The true image we bear is that of the everlasting King.

There are two family photographs I uniquely cherish. They bear a striking resemblance. 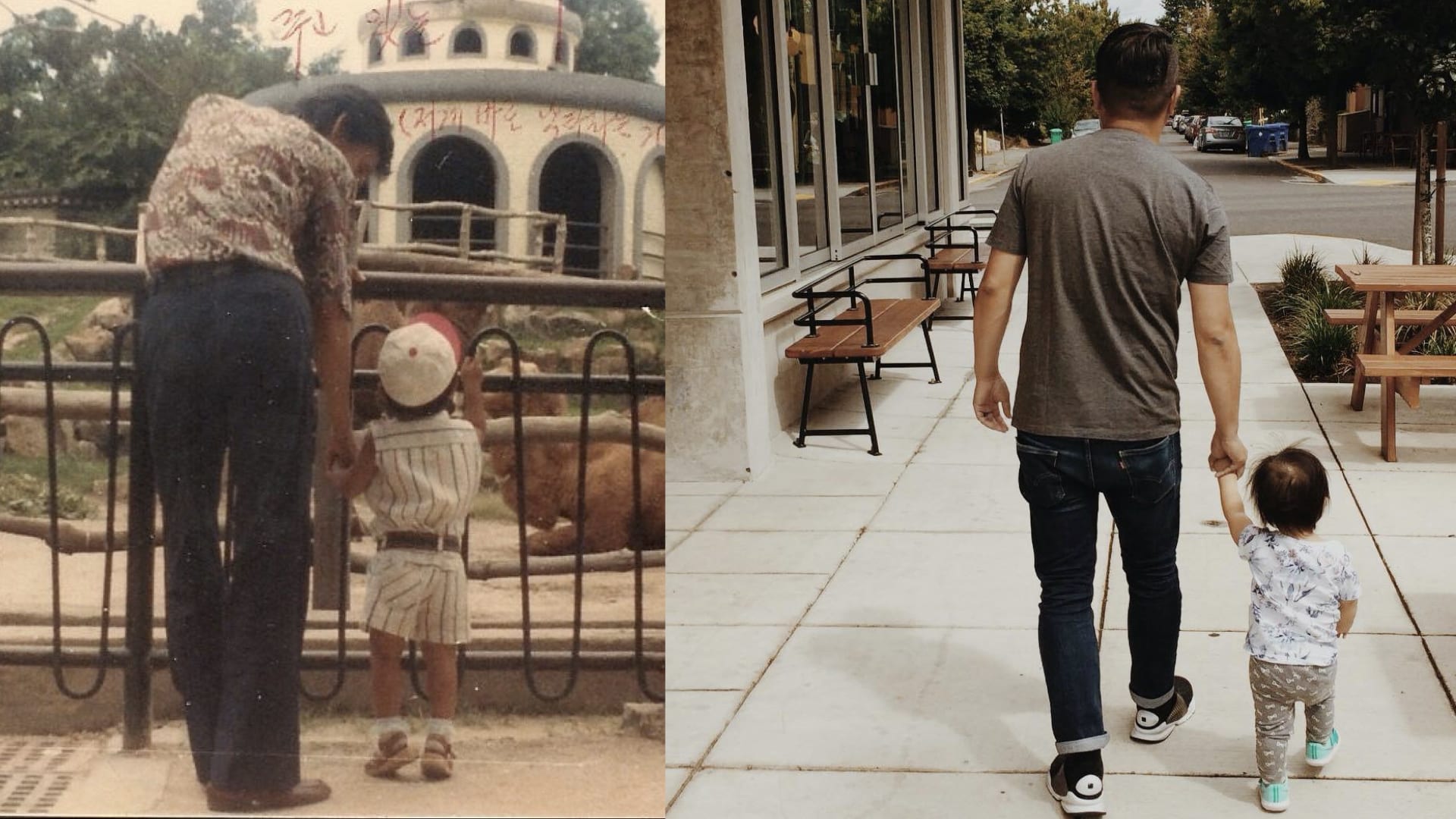 The photo on the left shows me and my dad. I must’ve been 3 or so. We’re at the zoo. Shortly after this photograph was taken, he was out of my life, permanently. It’s sadly fitting that you cannot see his face. He was a mystery to me. But from what I’m told, I look just like him.

The photo on the right shows me and my daughter a few years ago. She was almost 2. We’re walking in Portland, on our way to a favorite coffee shop. I remember the moment clearly—her, astounded by an unfamiliar city; me, astounded by her, this little girl who looks just like me.

My relationships with my father and my daughter couldn’t be any more different. She and I enjoy a rich and meaningful connection, filled with laughter and love. He was a father only in the most technical sense of the word; for all intents and purposes, he was a stranger. And yet, these three generations of my family share a literal resemblance. I look like my father and my daughter looks like me. This is the irresistible and undeniable bond of kinship—we bear the image of our fathers.

While many Christians might bear the name of Christ, it isn’t clear that they bear his image as their truest source of identity and allegiance.

So it is with the family of God. Republican or Democrat, liberal or conservative, we are first, foremost, and always sons and daughters of the same Father. Made in his image, we are called now to bear it—to embody and express the reality of God our Father in all spheres of life, including politics. Sadly, many Christians today bear the image of their preferred political leader or tribe more proudly and clearly than the image of their Father. Their identity is more profoundly shaped by a worldly god than the transcendent God. As a result, observers often can’t look at an assortment of Christians and say, “I see their family resemblance!” Because while many Christians might bear the name of Christ, it isn’t clear that they bear his image as their truest source of identity and allegiance.

In a fractured and lost world, what an opportunity Christians have to reveal the unifying power and freedom of bearing the image we were created to bear. Though Caesars come and go, Christ reigns forever. Though human leaders—and fathers—fail us, God the Father never will.

How to Pray When the Prognosis Is Grim – Christy Gambrell