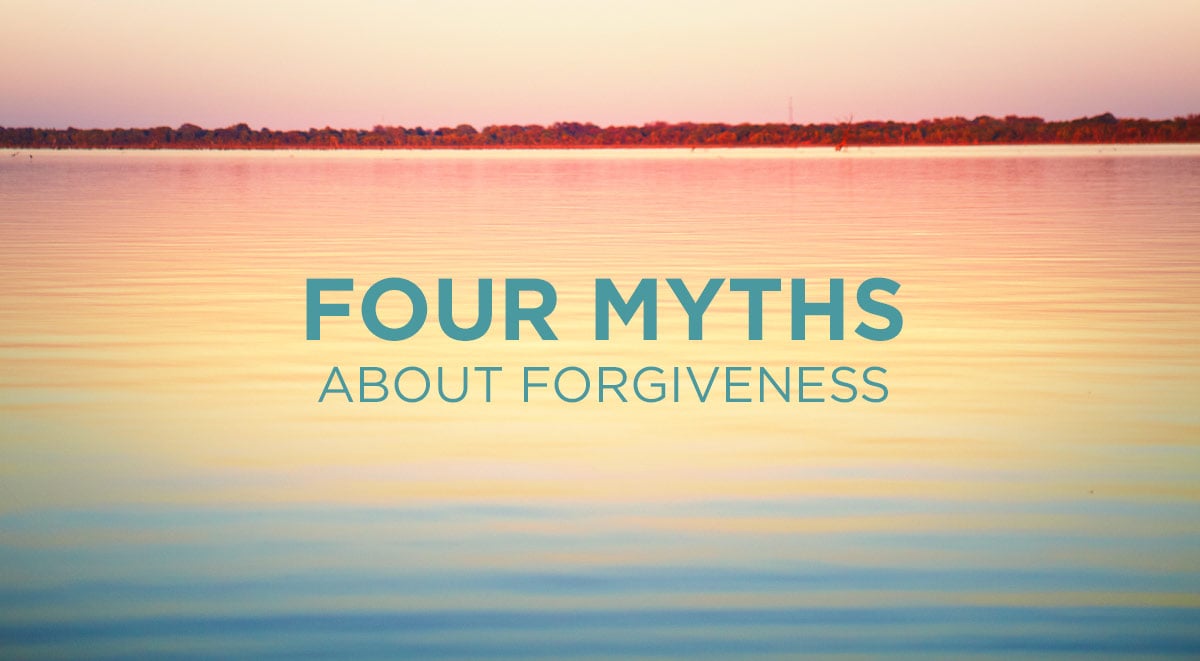 Many of us are very familiar with the Lord’s Prayer, a series of verses in both Matthew and Luke in which Jesus provides His disciples with an example of prayer to use in their own lives. In this prayer, Jesus reminds us how important it is not only to seek from God our most basic physical requirements but also to cry out to Him for our primary spiritual necessity—namely, forgiveness:

“Forgive us our sins, for we ourselves forgive everyone who is indebted to us.” (Luke 11:4)

Forgiveness is a wonderful message. While other worldviews offer mere moralism or an attempt to try and clean ourselves up or to do our best, Christianity is a message for the unworthy, lost, beleaguered, and sinful.

If we are not careful, though, we can fall into any number of misunderstandings about the nature of forgiveness—myths that, thankfully, the Bible helps us to dispel.

Myth #1: We Only Need to Be Forgiven Once

When a thoughtful believer comes to Jesus’ words here, a question almost inevitably follows: “If I have been forgiven once and for all by faith in Jesus Christ, why do I need to keep praying for forgiveness?”

Scripture’s answer to this question is straightforward. The Bible teaches us that when men and women come to trust in Christ, repent of their sins, and freely accept the Gospel offer, sin is not eradicated from their lives. Even though sin’s power is broken, we still sin. We still miss the mark.

Reflecting on the Christian’s lifestyle of repentance, John Calvin wrote the following:

So long as we dwell in the prison house of our body we must continually contend with the defects of our corrupt nature, indeed with our own natural soul. … The life of a Christian man is a continual effort and exercise in the mortification of the flesh, till it is utterly slain, and God’s Spirit reigns in us.1

In 1 John, the apostle expresses the desire that those of us who follow after Christ will take sin seriously. In 2:1, he even says, “I am writing these things to you so that you may not sin.” But if we do sin, he goes on to say, “we have an advocate with the Father, Jesus Christ the righteous,” who “is the propitiation for our sins.” We have one who pleads our case in the presence of the Father, so that when the Father recognizes that we sin, Jesus says, “I died for that sin, Father. Do not hold it to his account.”

That’s why it’s imperative that we keep short accounts with God. By confessing our sins as we become aware of them, we’re enabled to live in fellowship with God and with a clear conscience. And it is then, with a sense of gratitude, that we’re able to live a Christian life that is “fully pleasing to him.”2

Myth #2: God Forgives Us Because We Forgive Others

Some people read the words of Jesus’ prayer in Luke 11:4 backwards: “Forgive us our sins, since we also forgive everyone who sins against us.” In other words, “We’ve been doing well in forgiveness, so hopefully you’ll forgive us as well, God.”

What we discover in Scripture, though, is that the forgiven person is to be the forgiving person, not the other way around. Forgiveness springs from the grace of God, not from any human merit, and certainly not as a result of our going out and endeavoring to try and be gracious and forgiving to everyone else.

When we consider the enormity of our offense against God, it puts the injuries that others inflict upon us in perspective. That’s why, in Matthew 18, Jesus answered Peter’s question, “Lord, how often will my brother sin against me, and I forgive him?” by responding, “I do not say to you seven times, but seventy-seven times.”3 He wasn’t giving Peter an actual number. He was saying, “How about a number that you’ll never, ever reach?”

After answering Peter’s question, Jesus went on to tell a story to illustrate His point:

The kingdom of heaven may be compared to a king who wished to settle accounts with his servants. When he began to settle, one was brought to him who owed him ten thousand talents. And since he could not pay, his master ordered him to be sold, with his wife and children and all that he had, and payment to be made. So the servant fell on his knees, imploring him, “Have patience with me, and I will pay you everything.” And out of pity for him, the master of that servant released him and forgave him the debt.

You would think that this man, having been relieved of a such a large debt—what would amount to millions of dollars in our day—would be so outrageously excited about this news that whatever money he had, he’d be happy just to give it away to people in the street. But look what happens instead:

But when that same servant went out, he found one of his fellow servants who owed him a hundred denarii, and seizing him, he began to choke him, saying, “Pay what you owe.” So his fellow servant fell down and pleaded with him, “Have patience with me, and I will pay you.” He refused and went and put him in prison until he should pay the debt.”4

It is inconceivable that we, who have been forgiven such a vast debt, should ever fail to forgive the debt we feel others owe us because of what they have done to us. Forgiveness is not God’s reward to us for being forgiving. Rather, in our forgiveness of others’ sins against us we reveal our discovery of forgiveness in Christ.

Myth #3: Forgiveness Is a Feeling

In Ephesians, Paul encourages his readers, “Be kind to one another, tenderhearted, forgiving one another, as God in Christ forgave you.”5 That little phrase at the end, “as God in Christ forgave you,” is very important. It tells us that we are to model our expressions of forgiveness after God’s own forgiveness of us. And as the Bible teaches us, forgiveness comes to us from God not so much as an expression of His heart—although it is that—but as a promise of His word.

Now, this is not to say that forgiveness is merely cerebral. It’s not something that engages our minds alone; it also involves our hearts. At the end of the parable of the unmerciful servant, after describing the penalty the servant faced, Jesus warned His disciples, “So also my heavenly Father will do to every one of you, if you do not forgive your brother from your heart.”6

Our expressions of forgiveness must be genuine. We are not called just to mouth the right words. We are instead to convey to one another that we forgive each other wholeheartedly—and not just because we feel like it, but out of a genuine desire to please the God who forgave us so much.

Forgiveness brings with it a delightful sense of freedom. But this doesn’t mean that when we forgive someone, they will face no consequences. I may forgive my child for his reckless driving, for example, but he’s still going to pay the ticket fine. The fact that there are penalties does not in any way mitigate my forgiveness. I may forgive him; he still faces the consequences.

In the same way, we must be careful to recognize that our sin may leave harm in its wake—harm that requires recompense.

There’s a story told about a disobedient boy and his father. Every time the boy did something wrong, his father went out to the shed at the back of the house and hammered a large nail into the shed door. One day the boy came to his father and said that he wanted all of his mistakes to be forgiven, cleansed, done away with. His father agreed, and the father took the hammer and began to remove the nails one by one until they were all gone. A little later in the afternoon, though, the father found the boy sitting outside the shed door, bathed in tears. When he asked him what was wrong, the boy said, “Well, the nails are gone, but I can still see the marks in the door.”

We all still have to journey through our days. Yes, God will forgive our sins and remove the nails, but many of us will still live with the marks in the door. Even so, the existence of consequence does not remove the delightful reality of forgiveness. Consider the good news that the Bible proclaims: although we are all God’s debtors, and none of us can repay our debt, it actually has been paid by means of Christ’s atoning sacrifice for all who believe in Him. He suffered the full consequences of sin on our behalf. Because we have been forgiven, we are to forgive the debts of those who are indebted to us. This allows us to experience the assurance of our own forgiveness.

“Forgive us our sins, for we ourselves forgive everyone who is indebted to us.” What a wonderful hope we have in these words!

The Fruit of the Spirit: Eternal Goodness and Everyday Kindness (Part 6 of 9)

Alistair Begg on a Gift from God

What Does Charles Spurgeon Have to Say about the Power of Scripture?