It’s not a good cultural indicator when citizens increasingly believe they could be fired for contributing to a particular candidate or shunned for holding certain political views. But this is the finding of a new report from the CATO Institute, a DC-based, libertarian think-tank. Their new report, based their 2020 YouGov Summer Survey,  says self-censorship is on the rise in the United States, with 62% of Americans saying the political climate today keeps them from expressing their beliefs because others might take offense. This has grown markedly since 2017 when 58% of Americans say they self-censored their political convictions.

Republicans are far more likely to feel this way than Democrats, 77 versus 52%. Fifty-nine percent of those who identify as political Independents say they are more likely to keep their mouths closed on political matters for fear of negative reactions.

However, what is most stunning is this: CATO found that the more liberal an individual is, the less they feel the need to self-censor. There are stark differences among liberals themselves with many feeling far more judged by their own peers. Among “staunch liberals” as CATO referred to them, nearly 6 in 10 (58%) believe they can openly say what they believe without blowback from others, while 52% of moderate liberals feel the need to self-censor. This is a dramatic gap. It is also in stark contrast to the 64% of moderates, and 77% of conservatives who feel compelled to keep their beliefs to themselves. Regarding race and ethnicity, Latino Americans are more afraid to share their political views than White Americans at 65 and 64% respectively, while African Americans feel freer and more confident at 49%.

Getting Fired for Your Beliefs

In a major blow to the virtue of political free speech, 31% of Americans support the idea of a business executive being fired because he or she personally donated to Donald Trump’s re‐​election campaign. Only 22% believe the same executive should be fired for donating to the Biden campaign.

Support for such recrimination rise among the most liberal with 50% of strong liberals backing sacking executives who personally donate to Trump. And just over a third of staunch conservatives support firing an executive for donating to Biden’s presidential campaign. 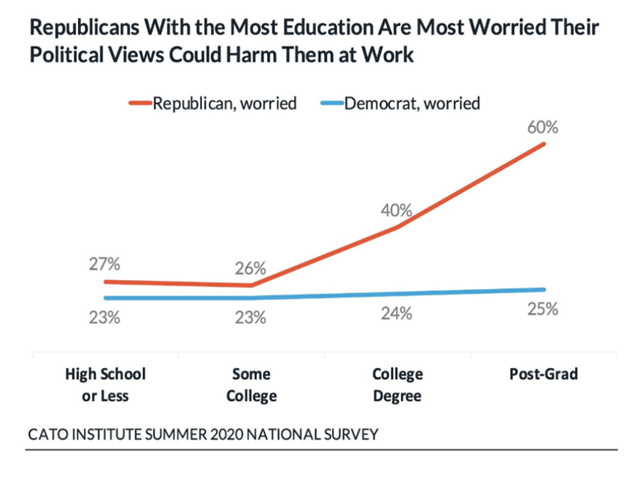 44% of Young Adults Believe Donating to Trump is a fireable offense.

Younger Americans are far more likely than their older peers to support firing people for personal political donations. Forty‐​four percent of those under 30 support tossing executives who donate to Trump. Only 22% of those over 55 years old believe such a donation should send anyone to the unemployment line, a 20‐​point difference. When it comes to being fired for donating to Biden, 27% of young adults support this compared to 20% of those over 55, a 7‐​point difference.

Be careful what you believe out there, or at least who you say it to.

The post CATO Study: Conservative Citizens Most Likely to Self-Censor for Fear of Offending Others or Being Fired appeared first on Daily Citizen.