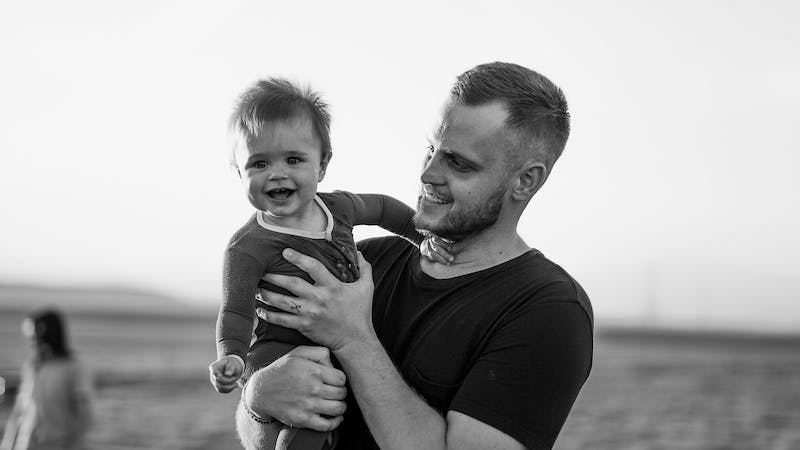 I don’t remember which son I held first.

In the chaos of the C-section, with doctors and nurses racing around, and the anesthesiologist team standing by — and two cords to cut — I’m not sure which of our twin boys I first took in my own hands. Or at what point, in the special-care nursery in those first two weeks, I sat there holding one of the boys and first realized, “This is my son.” My wife and I slept so little in those first twelve weeks that many memories are a blur.

Nor did I ever have the chance of focusing my father’s heart on one particular and only son. But as a father of these boys, and now of two younger daughters (who are not twins), I can testify from both Scripture and experience that there is something special about a father’s love for a son.

God made two sexes — which makes for four distinct relationships between parents and their children: father-son, father-daughter, mother-daughter, and mother-son. Interestingly, Jesus honored each of these four loves during the course of his ministry:

Elsewhere I’ve reflected on a father’s heart for his daughter, but here, without minimizing any of those other loves — there is something special about each one — let’s ponder the peculiar nature and contours of a father’s love for his son.

We could first linger over that human father’s special love for his demonized son. Matthew, Mark, and Luke, each in their own way, accent the father’s love for his son (Matthew 17:15; Mark 9:22, 24; Luke 9:38, 42). However, in all three Gospels — this is no small detail — the account of Jesus rescuing this father’s demonized son follows immediately on the heels of the transfiguration, which has at its heart the heavenly Father’s declaration about his Son.

Just as he had declared his love for his Son at the outset of his public ministry, at his baptism (Matthew 3:17; Mark 1:11; Luke 3:22), now, as the Son draws near to the cross, the Father again speaks over him a clear fatherly word of love and approval:

This is my beloved Son, with whom I am well pleased. (Matthew 17:5)

On the mount of transfiguration, Jesus “is reminded once again who he is,” comments Donald Macleod, “and reminded, too, of the Father’s love and approbation” (Christ Crucified, 21). Soon Jesus will face the cross, and be surrounded by mockers and the power of darkness, but here, in the calm before the storm, it is as if his Father says, “Son, in all you are now going to face, never forget who you are, never forget that I love you, and never forget how proud I am of you” (22).

The transfiguration, in context, may give us as profound a peek into a father’s love for his son as we can find. Let’s ponder it through Macleod’s threefold framework, which helps us get at several aspects unique to (or especially pronounced in) the love of a father for a son.

The Father says, “You are my Son.” A father begets a son, generates a son, as one who is like himself in a profound and objective way that a daughter is not.

A human father loves a son as one who, with respect to biological sex, down to every cell of his body, is like me. A son grows up to be a man, not a woman — a father, not a mother. God has entrusted us as fathers to raise up our sons to be like us — not just as humans and Christians, but as men, not women. He calls us to speak words with the gravity of a father’s particular identity-shaping power. And to demonstrate masculine strength at work in the self-sacrifice and humble initiative it takes to lead, provide for, and protect a wife and children.

A father loves a daughter — and oh, do fathers love their daughters — as someone who is not like me but rather like the most important person on earth to me: my wife. With a daughter, a good father models self-sacrificial masculinity and teaches her what it’s like to receive and be cared for by a worthy, Christlike man. But with his son, a father wants more. He wants his son to one day be the man. “You are my son.” I want you, as my son, to learn to be the one who will be the Christlike head of his family (Ephesians 5:23) and shoulder primary (not sole) responsibility for his family. As dads, we want our son to cultivate enough strength and gentleness to show honor to his wife as both weaker vessel and coheir of the grace of life (1 Peter 3:7).

A father looks at his son as one who will become what he is — a father — and so needs to learn what it means to be a man. To use masculine strength to help, not hurt; authority to serve, not be served; words to encourage, not demean. A father wants his son not only to benefit, as a child, from his father’s strength but also increasingly to become strong, as a man. A good father wants to replace himself with a young man like him, and better.

The Father also says, “You are my beloved Son.” Few words in all the world carry such power as a father’s declaration of love for his son. Few words are as profound in forming and securing the bonds that hold society together. And few words cause as much harm and instability when they go unexpressed, or when a father gives his son the impression of contempt. Or perhaps worse: apathy.

The mention of a beloved son calls to mind the affection that Abraham, after decades of aching, had for his son Isaac — the son of whom God said, “Take your son, your only son Isaac, whom you love, . . . and offer him there as a burnt offering on one of the mountains of which I shall tell you” (Genesis 22:2; also 22:12).

With respect to the heavenly Father, this love for his Son is a love we hear in what may be the single greatest promise in all the Bible: “He who did not spare his own Son but gave him up for us all, how will he not also with him graciously give us all things?” (Romans 8:32). Here we have a pledge as expansive as the heavens — to “graciously give us all things” — fixed firmly on the rock-solid ground of the gospel itself: God “gave him up for us all.”

Might the Father have spared a daughter? Yet at Calvary, he did not spare his own Son. A son is an extension of his father, the most official of all representatives, the father himself in a distinct person, different than a daughter. Special to a father’s love for his son is that at the right time, under worthy conditions, he might indeed not spare him something difficult — not from any lack of love but precisely because of the nature of the father-son relationship and its particular, sacrificial, burden-bearing love.

Finally, the Father says, “You are my beloved Son.” We might say he was “proud.” It’s a challenging word in English. Surely, we would not mean pride as the great evil but as a holy kind of proud, for lack of a better term, that a father will feel toward a good son. Macleod also mentions “approbation,” which is not much of an improvement. We might hear approval, praise or commendation, even respect. Whatever we may call it, it is a unique kind of admiration that a father has for a son as an instantiation of himself in a new generation.

In the heavenly Father’s declaration, we also hear his love in the unashamed claim of possession: my beloved Son. And we see it in the setting, that this is a public declaration, for the ears of witnesses: “This is my beloved Son . . .” Most of all, we hear it in the clause that follows: “. . . with whom I am well pleased.” Earthly fathers, note with me that our heavenly Father didn’t leave it unsaid. And saying so was no burden to this Father of all fathers. When we unfetter our manly tongues, and tell our sons of the pleasure we have in them, we increase both their joy and our own.

Words of a Father

No doubt, we could name other aspects peculiar to the father-son relationship and love, but at least for these three, what stands out as common among them is the power of the father’s words. What is the Father’s main action at the transfiguration of his Son? He speaks. He is present, and declares, “This is my beloved Son!” For the ears of the witnesses, and for the ears of Christ himself.

God wired the souls of men to hear, and be stabilized by, such words of identity, love, and approval from their fathers. Which is why it can be so deeply painful for sons whose fathers have been negligent, or worse, with their words. And why it is no small thing, in Christ, to find a Father in heaven who speaks to his Son — and sons — as he does.

Human fathers not only bring life into existence through begetting, but also speak reality into existence with their words. Just as Adam named the animals (Genesis 2:19–20), his wife (Genesis 3:20), and his son (Genesis 5:3). Partnering together with his wife’s indispensable ability to nurture (1 Thessalonians 2:7), fathers name, speaking with particular power, backed up by a life of action. As Paul models well, “You know how, like a father with his children, we exhorted each one of you and encouraged you and charged you to walk in a manner worthy of God, who calls you into his own kingdom and glory” (1 Thessalonians 2:11–12).

A father’s lived-out example is not to be minimized. Fathers set visible examples for their sons to imitate (1 Corinthians 4:15–16), as do mothers. Neither do we minimize the influence of a mother’s counsel, as Lady Wisdom to her husband and sons. But as the heavenly Father himself demonstrates in his declaration to and about his Son — “This is my beloved Son, with whom I am well pleased” — we fathers must reckon with the remarkable power of our words.