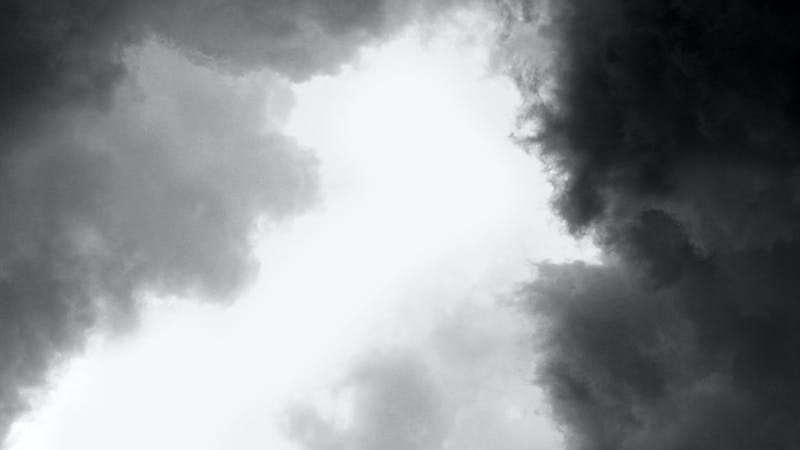 I have received your most recent letter lamenting your man’s recent fall into sin. These are the letters no angel wishes to receive. He descended slowly into the pit, you report. Too much time given to noises of the world; too little time in quiet communion. The flame grew low; temptation arrived; now he lies in darkness.

I am glad you stood by, ministering to him, even though you admit fumbling a bit. The enemy stood by too, no doubt, hissing accusations, eager to crush his hope and hand him more poison to medicate his sorrows. From our heights, we can still overhear his assaults: “How could you pretend to be a child of God? You will never rise from this. . . . It is useless to go to God. . . . He has forsaken you.” Such lies must be met constantly on the field of battle. His sons will not be so easily snatched from the Father’s hands, no matter how ashamed they feel.

As Wrath Rained Down

Now, in your ministering to your man, I am grateful to hear that you have not downplayed sin to bring comfort to the guilty. It does no good to minimize evil, but rather we direct his gaze beyond his misery to one who hung for sinners upon the cross.

Cross. Toviel, I shudder to even write the word. He entered his own creation, and his people rejected him. And oh, what a rejection.

Do you remember it? When the betrayer led his enemies in the garden that night, we assembled ready to chop off more than just an ear. Twelve legions of our finest soldiers stood armed for war. But we awaited a command that never came. Christ bid us, instead, stand down. His plans — praise be to God — soared higher than ours.

And do you recall the horror you felt as sinful hands grabbed the ark of God and robed his mortal frame in anguish? Eternal strength — now with bloody back and brow — could not reach the hilltop with his cross. As wrath rained down upon him, the fountains of living waters dried up, crying, “I thirst!”

Behold him, the blessed God, half dead, stapled to the tree, accursed. We could not even recognize him as a man. As bait on a hook, he dangled over the mouth of the pit.

Toviel, ask him why this Shepherd allowed himself to become a mangled mass of tilled flesh and raw wounds. Ask your pit-fallen man how such a Lord came to such a throne. And give our Master’s wounds a voice to reply.

Each gash, each stripe, each bloody pool upon the surface of his flesh, shrieked, in the first place, against sin. All questioning whether God might, in the end, sweep iniquity under the rug — “letting bygones be bygones” — was put to death. The arrows God’s people shot up at the stars fell back to earth upon his mortal frame, bringing heavenly violence upon his human head.

Here, at the most awful and wonderful of places, convened the terrible reunion of all his people’s lies and lusts. In attendance was every itch of their pride; hunched over him stood every sexual fantasy, every shy smile at the failings of others, every lurch for significance apart from God, every neglect of loving God with all and neighbor as himself. For every dare of God’s patience, every abuse of his forbearance, every exchange of his glory for passing pleasures, Christ died. “The Lord has laid on him the iniquity of us all” (Isaiah 53:6).

Returning to Adam’s nakedness, the Holy One hung below this incredible caption: He became sin. Every filth long-forgotten by his people now emerged from the shadows, climbed from their holes to crawl upon the spotless Lamb. He embraced to his bosom the shame and pollution of their sin, invited the jagged tools of torture and the crushing wrath of his Father that their crimes had aggravated. He was “stricken for the transgression of my people” (Isaiah 53:8).

Here is the offspring God promised the woman — the fangs piercing his heel as he presses down upon the serpent’s skull. Here is Abraham’s ram caught in the thicket, struck by his Father’s flint knife to let Isaacs like your man go free. Here in pitch blackness, in a well so deep, in darkness so mighty, agonizing for every breath, flashes forth righteous anger as God extinguishes upon that horrid candlestick. “He bore the sin of many” (Isaiah 53:12).

Yet the cross also manifests another momentous word, a word reverberating with hope, even in the darkest pits: love, Toviel, amazing love. His pierced hands dripped affection. His bloody crown glimmered with purchased grace. His flickering eyes reflected the Wedding Supper of the Lamb. His stapled feet traveled, with undeniable passion, after his wandering sheep. His lacerated back carried sinners from the depths of hell, bringing them safely to his Father.

Bid your man’s troubled soul to remember the cross, as the Lord himself directed them. Remember the blood of the new covenant poured out for his sins. Bid your man drink this sweetest wine to warm his faltering heart. Remember the bread of Christ’s body broken for him; remind him, over and over again, that his Shepherd laid down his life while he was yet a sinner. Here is the holy ground, upon which the best sermons of their most worthy preachers must remove their sandals and bow low in adoration.

Read to His Soul

Satan’s design against your man, of course, bids him to consider his sin more than his Savior; his disease more than the cure; his deformity more than his Redeemer’s beauty. When your man’s eyes fall to the ground, lift them to Christ. It does not honor the physician, nor restore the mortal gash, to stay away and let wounds fester.

Make no mistake: he must hear, “go and sin no more,” but first remind him of his Savior’s very name: “You shall call his name Jesus, for he will save his people from their sin” (Matthew 1:21). Bring his guilty soul to God’s glorious book to read:

Should such words not glow the brighter rather than fade from view before his sin?

Though he lingers in the shadowy world where his children still sigh and groan over real corruption remaining in their flesh, day will break — Sunday followed that Friday. As he perseveres in the faith, your man will soon enter the realm where song flows more natural than speech, where steadfast love overwhelms as the waves do pebbles upon the shore.

There, happiness will ever swell as the lyric becomes more radiant, “Blessed is the man against whom the Lord counts no iniquity” (Psalm 32:2). And his voice will gain more vigor to sing, “Worthy is the Lamb who was slain to receive all glory!”

Direct your man’s fallen gaze to consider him — and keep considering him — who endured from sinners such hostility against himself that he might not grow weary or fainthearted. Let the sight refresh his lips to sing from his heart before his flesh and the devil:

My sin, oh, the bliss of this glorious thought!
My sin, not in part, but the whole,
Is nailed to the cross, and I bear it no more.
Praise the Lord, praise the Lord, O my soul!

In The Gabriel Letters, a senior angel (Gabriel) counsels a junior angel (Toviel) on how to assist a human against the temptations of demons and how to bring him home to heaven. This series is inspired by the classic work of C.S. Lewis, The Screwtape Letters.

Our Young Earth: Arguments for Thousands of Years – Jason DeRouchie

Our Old Earth: Arguments for Billions of Years – Wayne Grudem

Why Is Christian Unity So Hard? – Jon Bloom